Has it been a month already since my last post? Well, better late than never!!

What another eventful month it has been again...

First of all, I ended up selling my green Rice trailer as although it was a good trailer, it needed a bit more work than what I am capable of doing and the money I would have had to spend fixing it up, would have added up to buying my friend's Ifor Williams trailer that she was selling. So sold my old trailer and bought my friend's which doesn't need any work doing to it! 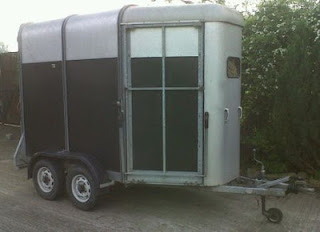 It's also light enough for our car to tow it with one horse in it (my friend's car that towed it, is the same engine size as ours) so that opens up more show options for me although leads us to the next "event".

On May 27, we went to the first Diamond Equestrian horse show of the season. We had glorious sunshine so hacked the 5 1/2 miles there without any problem, trotting and cantering along the grass verges to get there a bit quicker and as a nice fun warm-up.

We entered Best Turned Out, Best Condition, Riding Club Horse, In-hand Veteran and Prettiest Mare, the first class being Best Turned Out where we came 1st. Hattie was lovely and shiny and in good condition and was striding out nicely at the walk. My new habit didn't look too shabby either! 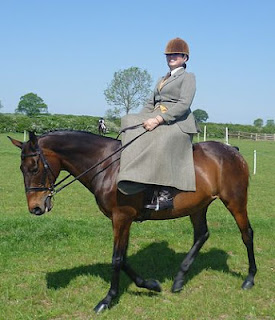 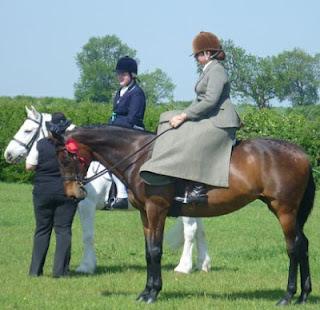 Our next class was Best Condition and I thought Hattie was in with a good chance to win it as she was sparkling, had been working well all month so was in good muscle and then it all went downhill when we had to do the trot up for the judge. She was lame!!! Hattie had been fine hacking all the way to the show, striding out nicely in Best Turned Out and in the walk in-hand and there wasn't any stones in her hooves or anything. She does have a problem with her off-side stifle on very rare occasions and the ground was hard baked and bumpy so I wondered if she tweaked something and the hard, bumpy ground aggravated it? There was no heat, swelling, cuts or scrapes either. 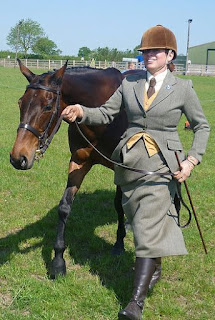 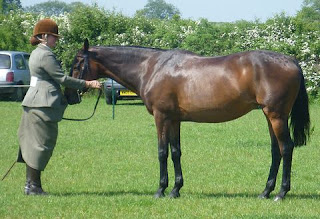 The judge placed us last (obviously) but she said that had Hattie not been lame, that Hattie would have been placed at the top as she was in excellent condition and in good weight for her type and age.

That cut our day short and I had to scratch from the rest of my classes but there was still the problem of getting back home. Although she was fine walking, I didn't want to push walking her all the way home, even leading her but luckily there was a horse transporter company there that was just about to leave so we got a lift back home. Also luckily, I got my show fees back from the scratched classes so was able to pay the horse transporter as I had no other cash on me! D'oh!!!

When we got back home, I put her on box rest for the rest of the day and then with day turnout the next day, gradually increasing it to the 24/7 like the rest of the herd. There was no lameness when I turned her out the next day after the show (although a slight stiffness on the right bend when trotting in-hand) and she proceeded to gallop off like a loon, sigh...

She was fine afterwards and I started schooling, hacking and lunging as with stifle issues, regular work (and working properly across the back and from the back end) and keeping the horse fit, is the key to preventing and healing them. Hattie is fine now apart from her idiot boyfriend, Stan, stepping on her nearside hind shoe the other week and causing her to step on the clip and going lame for a day. The farrier fixed that and *touch wood*, no more accidents although Hattie has over reach boots on each hoof now!!!

Due to what happened at the Diamond show and having to pay the horse transporter a chunk of cash, my ever obliging husband, said that he will tow us to local shows now. I swear I saw Hattie smile when I said that and did wonder at the time if Hattie had "faked" lameness just to get sympathy tows from my husband!!

So between the Diamond show on the 27, Hattie being lame twice, I only had about 2 1/2 weeks to prepare for the Side Saddle Association Area 12 show on June 17! We started out schooling slowly, with lots of hacks over uneven terrain and built up from there. I have also made the decision to no longer jump Hattie due to her off-side stifle and just concentrate on dressage and equitation as she is 16 and want to keep her fit, healthy and competing as long as she wants to keep doing it.

My friend Julia, was also going to compete on Hattie in the Novice Equitation class as in that class, horse sharing is allowed (it is walk and trot only and only for riders who have never entered a SSA Equitation Qualifying class). I wanted to do the Novice Eq, Restricted Eq and the Concours D'Elegance classes so we prayed for a let up in the crap weather we've been having (still wearing winter coats in the middle of June), packed up the trailer (Julia borrowing her generous ex-husband's Land Rover to tow it) and off we went on Sunday to the Area 12 show!

Well, win we three did! Julia came first in the Novice Eq class and I came third in it. The judge said that Hattie was too fast but I only rode her forward like how Lili's been training us to do for our dressage tests. I have a feeling that Equitation judges look for different things in the way a horse goes than a Dressage judge so will have to remember to change my style of riding to suit each discipline. It is an interesting comparison between the two!  I am happy with my placing as Hattie was working nice and forward from behind in a nice outline instead of the "lacking purpose" comments we used to get in dressage tests so that is a big achievement!

Julia rode like an old pro despite only having ridden Hattie 3 times and only just finishing her habit in the 24th hour!! I knew when I saw Julia ride that I didn't have a hope in hell of winning that class. I think telling her that I would have to beat her with my antique crop if she didn't come 1st or 2nd helped, lol.  Go Team Hattie!

Walking around in the Novice class...

Our turnout being inspected in the Novice Eq class. the judge said that she didn't normally like numnahs on side saddles but she liked mine as it was unobtrusive and wasn't too thick. 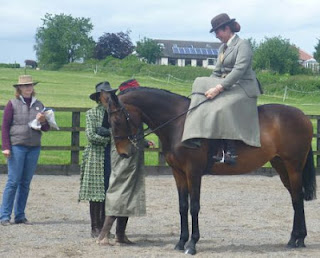 Now if Hattie can only trot like this for our dressages tests... 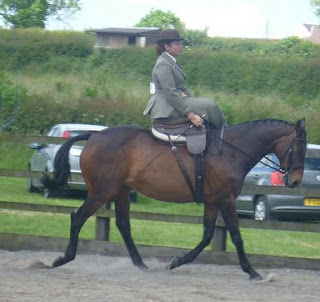 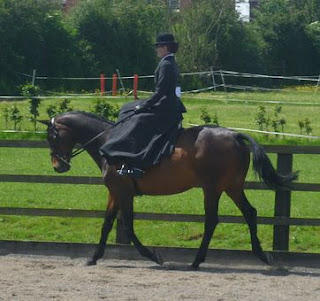 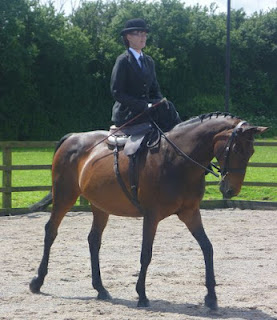 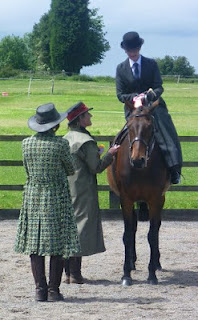 The next class was the Restricted Equitation class which is for riders who have never done a SSA equitation qualifying class OR have never placed in 1st- 3rd place in one and requires you to walk, trot and canter with the group and in your individual show. I remembered to think "less dressagy" and had to sit back and collect Hattie more to a slower trot but not to let her go on the forehand or "lack purpose". It was hard but we did it and won 1st! I don't have many photos as my husband filmed a video of it (have yet to put it on You Tube) but there are lots of photos on the show photographer's website (the Restricted Eq photos run from numbers  17JUN12-224 to 17JUN12-241). I need to order some prints.

Hattie and I with our 1st place rosette... 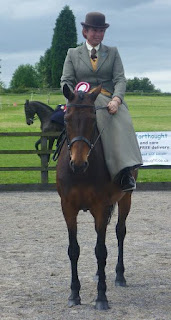 The next class the Concours D'Elegance where I was with the "Big Girls"! It's basically like Best Turned Out but your riding and the whole picture your present is also judged. Nerve-racking stuff! I've never done a Concours class and was worried that Hattie's half bald mane and our snaffle instead of double bridle would get us marked down heavily but it didn't, we came 3rd!

Everyone had to walk, trot canter together on both reins and then for the individual show, we did them in pairs and had to try not to run into each other. The judge said that we had excellent turnout and asked if that was my real hair as my bun was big, lol.

I'm really pleased how all three of us did, the judging was fair and we can't wait for the next SSA show!

Oh, and by the way, I seem to have acquired this lovely Parker & Sons Reversible side saddle..... ;-) 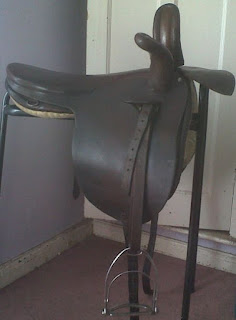