Lately, there has been a glut of reversible side saddles for sale on Ebay. I posted about this before as they all seem to come in waves. It's great that all these saddles are coming out of the wood work to be used again as there is a demand for saddles that can be ridden on the off-side due to more people taking up side saddle riding that can't ride on the nearside or astride due to their "bodies not co-operating"!

There was a little Champion & Wilton reversible side saddle which had a 17 1/2" seat from the front of the fixed head to the cantle so a child or small adult size. It has the style of safe which my Parker saddle had (until some silly person cut it down!) so will show my saddler this photo to show how I need it made. 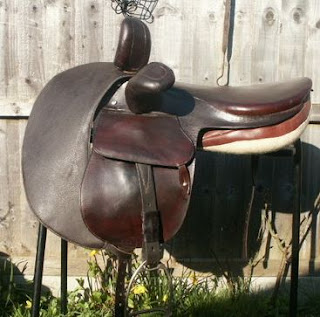 Interestingly, although this saddle is a reversible, it seems to have been ridden mostly on the near side as there are no D-rings on the nearside for a sandwich case or to swap over the balance girth when riding on the off-side. All the D-rings are on the off-side only. 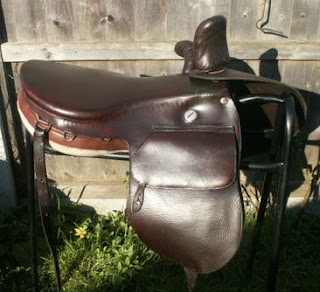 This particular saddle does not have a cutback head like mine either so the leaping head just screws into one hole at the center of the pommel and you would just twist it around to whatever side you wanted to ride on. 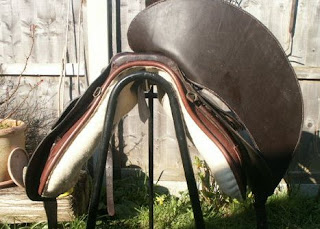 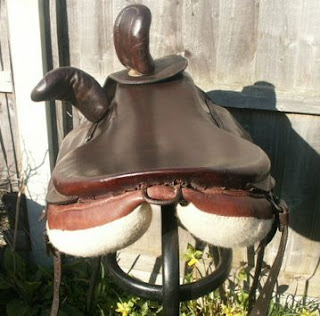 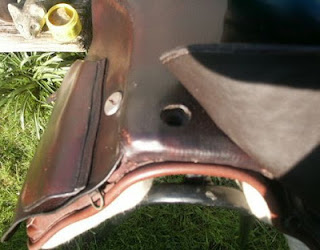 Look how the Champion & Wilton fitting was reversed for riding on the off-side. 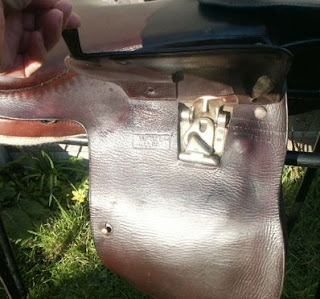 Another reversible side saddle that has been coming up on Ebay, is a TINY one made by a saddler called Wick. I don't know anything about Wick saddles so it may have been a local saddler who bought a tree from the "Big Name" saddlers of the day and made their own. During the golden age of side saddles, most local saddlers would have been more than able to make a side saddle on the same level of quality, if not better, than the "Big Name" saddlers of the era. Hard to say what stirrup fitting this little 14" reversible has but it looks very similar in style (minus the missing safe) as the Champion & Wilton. This little Wick, however, looks to have a cutback head. 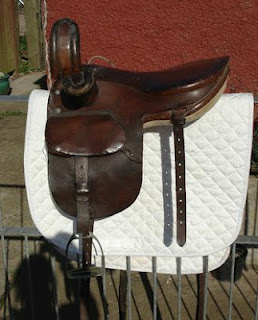