Well, this weekend was a washout. It has been non stop raining and lukewarm here in England since April so most shows have been cancelled due to saturated ground. We were supposed to go to the Burbage Riding Club show today and try to qualify for the Equestrian Life Summer Champs held at the Ponies UK show in August but the show was cancelled due to the horrible weather so that is those plans out the window as I won't have a chance to try and qualify again now.

I was so fed up yesterday that we went on a hack. My lovely and comfy "new" Mayhew has gone off with my friend Julia, who will be building up the near-side tree point for me and didn't feel like riding on my Whippy so hauled out my reversible side saddle and had a play with some pads to try and raise the back a bit to make it a bit more ridable until my saddler can come and collect it to work on it. 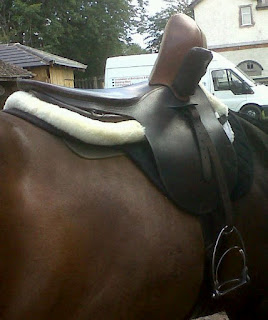 I have one of those LeMieux sheepskin halfpads with the riser inserts that you can put in at the withers and/or at the seat that I use for Hattie's close contact saddle. Since the seat on my reversible side saddle is symmetrical, the LeMieux pad actually fits it quite well so whacked 3 rear risers into it in the seat slot on the off-side to build up the right hip area. I did not put any risers in at the front as the sheepskin on the half pad along would be enough to keep it from dropping down on Hattie's withers like it did the first time I rode in it. 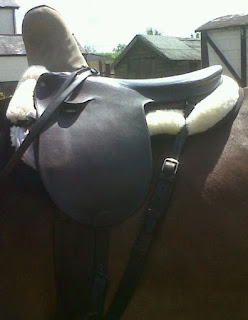 I used my off-side cotton quilted pad under the half pad and the front of the saddle is perfect with no pinching and perfect wither clearance without sitting too high, even with me sitting in it with no rolling. This is good as that tells me that just some flocking will be able to lift the saddle up at the front. 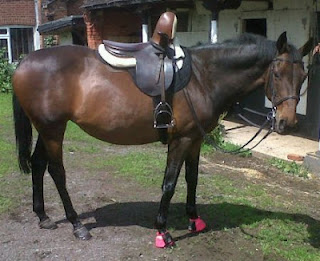 The saddle sat a lot more level but even with the back riser inserts, the saddle still dropped down to the right a bit but it was much better with the inserts than when I rode in it the first time without any pads. My saddle will be able to flock the panels up no problems but at least the tree seems to be a good fit. 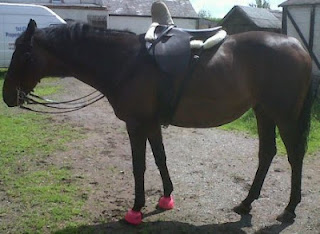 I used my big off-side queen on the saddle but think I will need to pad it up more. The pommels on the saddle seem to have been made for a larger thighed lady than me. The leaping had is very open but fits ok but the upright head needs much more padding as it's so thin. Julia took the remnant of the safe away with her too to try and restore it to it's original full length. 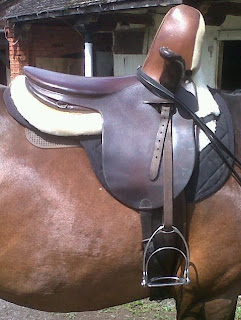 I also tried Hattie's new double bridle on her (I used it without the headslip to try it with her pelham) but I think I'm going to have to try a another bit as she hacked out ok in it but today she was sticking out her tongue while schooling so going to try a bit with a little port so there is room for her fat tongue. The bit, although it is a "KK" style lozenge mouth, it does have a rather thick mouthpiece which she tends not to like, so am going to try a thinner mouthed non jointed bit with a little port so that there is room for her fat tongue. 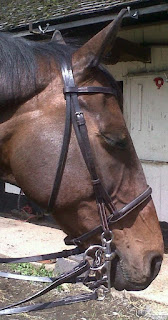 The weather held out for us so we headed towards the Ford river to cross the bridge so we could hack down the lane. When we were met with this.... 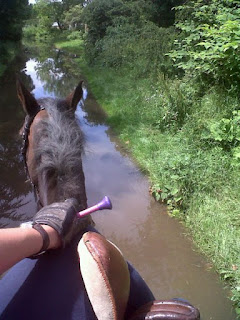 It didn't look too deep and it's not far down the lane to get to the bridge so kept on going. Well, it got deeper and deep er as we got closer to the bridge and I was thankful that I was riding a 15.3hh horse and not a pony as the water ended up coming just over 3' high and just reaching the edge of my saddle flap (my right foot got wet). Hattie wasn't bothered and started eating some tasty hedge. 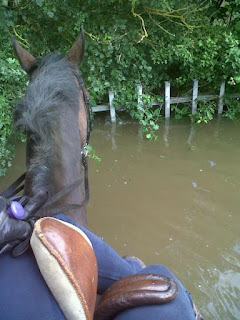 This is Hattie at the entrance of the bridge. I'm 5'9" and on foot, the ends of the bridge banister that you see in the photo, comes about waist height on me. Just beyond Hattie's head, but just out of the photo, is the Ford river where there is an upright sign letting people know how high the river was running. The water covered the 6' mark of the sign!!!! 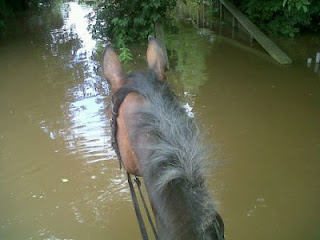 It was a bit hairy but we made it over the bridge safely and continued on our way. The water seemed to get a bit higher on our way back home and my foot was sodden but we had a little trot as the water level got lower up at the top of the lane so that was fun!

It just amazes me that England is nearly underwater at the moment while North America is suffering a heat wave. I wish I ship over the excess water from here to cool things down there!!