If anyone here suddenly wins the lotto before September 26, then one of the things you may want to buy before you go away on holiday, is a side saddle from 1574 in which Queen Elizabeth I rode in. It is lot number 196 being auctioned off with an estimate of £8000- £10 000 by Dreweatts Auctioneers on September 26 in their Arms, Medals & Militaria sale. 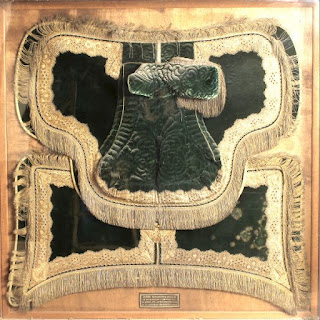 Note the long off-side head with the fringe hanging from it, this would have probably been more of a hand hold. Look how tiny the fixed head is! Bet the velvet was comfy though. Too bad there is no seat measurement from the front of the fixed head to the cantle to see what saddle size Queen Elizabeth took. She was tall, 5'10" as her father, Henry the VIII, was well over 6' and her cousin, Mary, Queen of Scots, was about 6'2". Hmmm, that saddle would fit me! ;-)

Here is the auction description for those who can't click on the link as well as the hilarious story about how the side saddle is "cursed"...

Queen Elizabeth I visited Bristol in 1574 "Because great honour accrued from rare opportunities to entertain royalty, every effort was made to show the City at its best. During the visit "the mayor and all the council, riding upon good steeds, with footcloths, and pages by their sides" received Her Majesty within Lawford's Gate, just outside the boundaries of the city"

"At the gate the mayor delivered his mace unto her Grace (thus relinquishing the sign of his authority as her lieutenant) and she delivered it unto him again," reinforcing her authority over the city and his dependence upon her for favour. After an oration by John Popham, the Recorder, and the presentation of a gift of £100 in gold to her, the queen was escorted through the city in a procession in which "the mayor himself rode nigh before the Queene, betweene 2 serjeants at arms." This procession, with each rider holding his proper place in relation to the queen and the others in the order of march, set the tone for the military displays that occupied the Queen's time for the rest of her three-day stay.

The Kington Saddle by Miles Kington
A Fax to his Wife
My dear Caroline,
I sometimes worry that I may pass on to the other side before i have handed down to you the secret of the KINGTON SADDLE. Ridiculous, i know, as the doctor has said given resonable treatment and a vist to the pub every now and then, there's no reason why i shouldn't last another 40 years, but nevertheless i think perhaps the time has come to tell the dread secret of the KINGTON SADDLE.
But it's just a silly old priceless family heirloom sitting in an old glass case, i hear you laugh. There's nothing secret about it at all.......Ah, would that be so. But this KINGTON SADDLE has been handed down through eight or nine of, maybe seventeen generations of the Kington family, all of whom are now dead. Yes, every single previous owner of the KINGTON SADDLE is now in another place, and it's not Saudi Arabia, i'm talking about. Why do you think they were all struck down before they reached 100? Why do you think nobody ever gets the KINGTON SADDLE out and rides around on it on a horse? Why, above all, do you think nobody even wants to have it in their house, and everyone whispers furtively: "Let's give it to cousin Laurence..... Let's put it in a museum....."?
I'll tell you.
It's because of the curse of the KINGTON SADDLE. The curse which has scattered the family far afield, from Wrexham to London, from London to Bath, and from Bath to a crazy steam railway between Keighley and Haworth only five miles long, for God's sake. As a child i remember getting a really nasty sore throat and my father leaning over my bed and saying, "The curse of the KINGTON SADDLE has got him, we must apply the only know antidote, mother, give me a corkscrew" - yes, at the age of ten my life was saved by red wine and i have never looked back since, but that is another story.
I am surprised you have never noticed that none of the Kingtons ever rides a horse. There ia a good reason for this. None of us can ever ride a horse because of the secret of the KINGTON SADDLE, and were any of us to mount a horse, it would mean instant death. For the horse. My grand-father, Major Kington, mounted a horse for the regimental race in 1907. It collapsed on the starting-line and my grand-mother lost a lot of money. My great-great-grandfather Colonel Kington took part in the charge of the Light Brigade, and had not gone 5 yards before his mount keeled over, dead, badly creasing his trousers.

Well, it looks like I'll be buying LOTS of lotto tickets this week!!

I WANT!!!!!!! Read all about the Swarovski-encrusted antique ladies side saddle here...

Kelly-Savage: Jubilee Side Saddle: As I’m sure you know, the 2 nd -5 th June was the Royal Jubilee Holiday Weekend here in the UK.  We enjoyed a wonderful four-day weekend of...
Posted by sidesaddlegirl at 16:25 No comments:

My Beck is Back!

Guess what came back??! My off-side Beck Morrow side saddle! Sadly, I've not been able to try it just yet as Hattie's shoeless feet are still ouchy when she walks anywhere bumpy, even on the wood chippings in the school but as soon as her shoes get put back on (hopefully next week!!), then my Beck Morrow will be put through it's paces.

On the nearside, the leaping head was opened up for me as it was curved for a leg smaller than mine and the panel was built up with new felt and the original felt to give a nice level ride. My saddler also put a new overgirth strap. 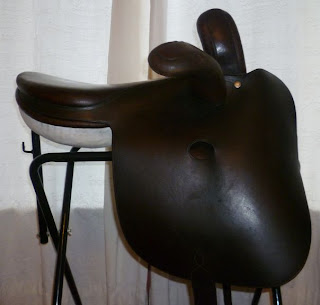 The topside of the BEAUTIFUL new panels! My saddler originally wanted to do them in leather like what the saddle originally had but we decided on traditional looking panels as Hattie seems to like fabric on her back rather than leather and it will provide a bit more grip on her. My saddler also extended the safe as the original one was short and had curled back over the years. He put all new billets and put two point straps on the tree point so that I can play around with which of the 5 straps want to put my balance girth on and which one to fasten my girth too. It will give Hattie maximum set for her forward girth groove. 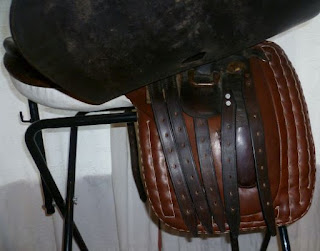 Beck Morrows were known for their "open heads" which means that the safe did not extend over the cutback head. I'm going to use my big queen on this saddle like I used to as it as such a little stumpy fixed head. The seat is 17" in UK sizing and 21 1/2" in US sizing. It's a comfy 14 1/2" across! 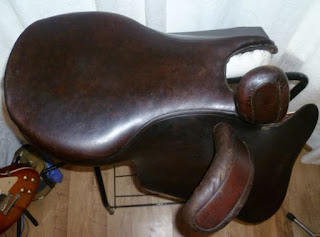 My saddler said the tree on this saddle is very generous so he heavily felted it up for Hattie. The good thing about the felt layers, is that if I ever get a larger horse, then he can re-jig the felt inside and sew the linen back on. 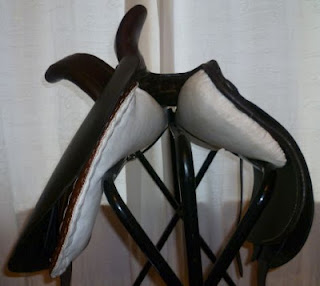 The beautiful slick lines of the nearside. A new balance strap and over girth were added as the original overgirth tore off. 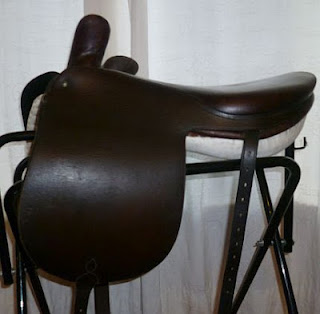 All new billets on the nearside and my saddler restored the piping that bound the edge of the panel. All the Beck Morrows I have seen, have had these "slots" for the billets as well as have a point strap "slot" which was good, as it's the point strap that I need! 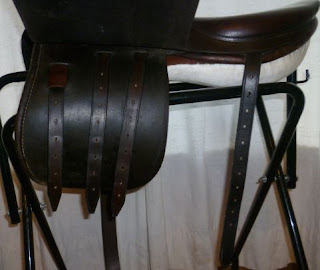 All being well, my saddle and my unused off-side apron will make it's show debut on the 16th!
Posted by sidesaddlegirl at 19:44 2 comments: