A Good End to the 2012 Showing Season

Sorry for the lack of posts, it's been a busy past month with work and showing! We managed to get to the last two South Kilworth Riding Club shows on September 16 and September 30, but unfortunately missed the Burbage Riding Club Championship show on September 23 due to my trailer "going lame" that morning. It turns out, it was just some loose wires in the electrical connection that was easily sorted out later that day by the guy at the car parts shop for free. D'oh!!!! It was VERY annoying as Hattie was all ready to go that morning and I had prepaid the show in March so lost my £40 in fees. At least my electrical connection was sorted out though as it had always been a bit iffy.

I'm pleased to say that Hattie and I did brilliantly at both South Kilworth shows coming 4th, 1st and 3rd in the Turnout, Style & Appearance (like the Turnout but your riding and horse's way of going is also judged) and Ridden Veteran (horses aged 15+) classes on September 16 and 2nd, 1st and 4th in the same classes during the September 30 show.

Those results combined with the placings we received in the August show meant we ended up getting the Reserve Championship in Turnout and winning the Championship in Style & Appearance AND Ridden Veteran!!!

The awards presentation evening where we get our trophies and champion rosettes, is next month in November so am really looking forward to that. I'm so pleased with Hattie as she always knows what to do at shows and always tries her best. I think I have the Best Horse Ever. 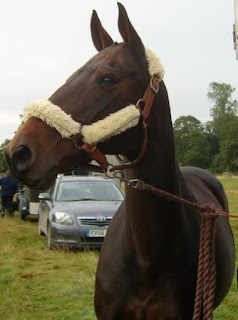 Thanks also to my friend Gill, who hauled my trailer and our butts to both South Kilworth shows and waited for us all day (and taking photos!) despite being riddled with the flu and a bad cough. I need to convince her to bring her Connemara along to the show next year!! This is Gill's trusty car, a Vauxhall Frontera... 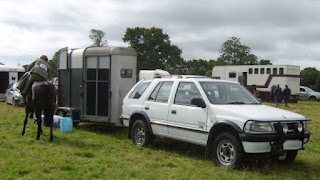 There are loads of photos of both shows on the show photographer's website, NJB Photography, and I still need to order some proofs as there is some good action shots on there. Here are some highlights of both shows taken by Gill and by my ever obliging husband!

Walking before inspection in Best Turned Out... 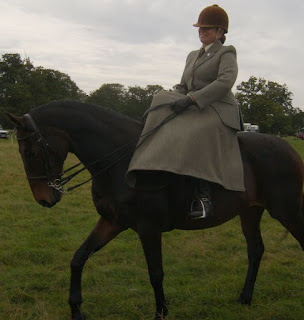 and then being inspected! 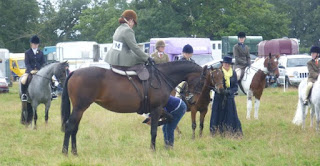 Trotting and cantering around at both shows in Style & Appearance. I really like this class as EVERYTHING is judged and you have to really make your equitation flawless. 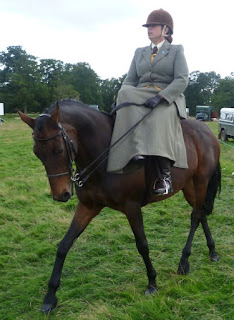 And us winning the Style & Appearance class and showing off our hard earned trophy during the lap of honour! 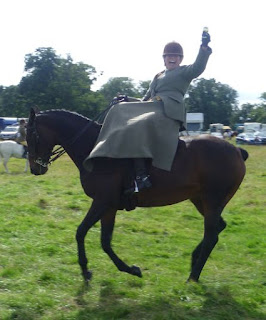 The start of our individual show in the Ridden Veteran (15+ years) class. In this class, your horse's conformation, fitness, condition and way of going is judged. Hattie is 16 and there were horses older than her in this class. 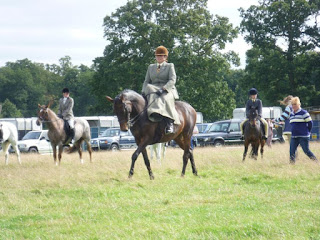 In Ridden Veteran, you enter as a group on the right rein and all walk, trot and canter together before the judge lines you up to do your individual show. In out show, the judge wanted us to so walk, trot and canter as well as an extension in canter down the long side. I love doing that side saddle. Hattie getting a well deserved long rein and pat after we had finished. Note the other side saddle rider in the class! 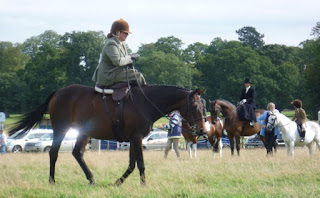 Barbara (the other side saddle rider) and I with our rosettes after the September 30 Ridden Veteran class. Her horse is 18 and is a handsome boy. I did put it forward to one of the committee members if they could possibly hold a side saddle class next year so we shall have to wait and see. 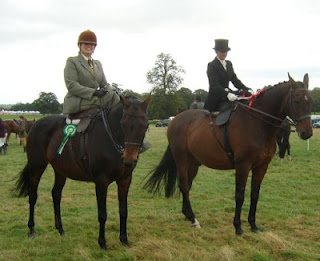