Not only were Barbara and I side saddle at the South Kilworth Riding Club shows but two young ladies also  made their side saddle debut at the show as well.

You remember Maria who tried out my little pilch side saddle in August? Well, I did promise her that she could show her pony Misty, in my pilch and show she did! That girl did not want to get out of that side saddle and rode around the show grounds in it all day after her two fun showing classes were finished. The only reason why I got it back, was because she had to pack up to go home! LOL!

Misty is very round so brought my gel grip pad to stabilize the saddle (which it did!) and Maria and Misty came 5th in the "Pony Judge Would Most Like to Take Home" and got a special placing in "Cheekiest Face".

Maria and Misty just tacked up in the side saddle before her classes... 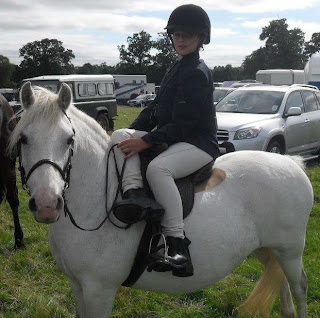 Walking around while the judge chose the pony that they Would Most Like to Take Home... 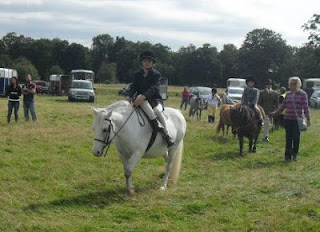 The Fun Showing classes don't usually call for cantering but they do usually have the young riders (mostly novice riders), trot around and was worried that Maria would have problems at the trot as she had only even done a few strides on the lead rein at home but I can see that my worries were unfounded as she just did it without any hesitation. Ah, to be young and fearless again! 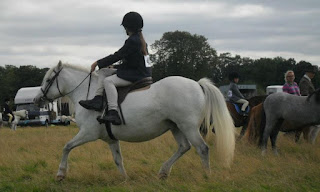 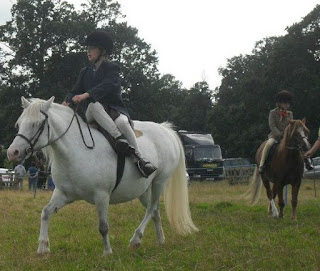 Maria and Misty with their 5th place rosette... 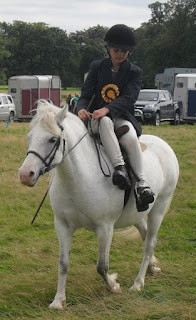 Maria, Misty and Chloe showing her friend's horse, Bailey, in Cheekiest Face (note Barbara riding side saddle in the background as well!)... 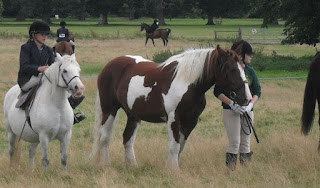 Chloe also got her chance to ride aside that day as since she doesn't have her own horse and was desperate to show, I allowed her to ride Hattie but on one condition, that she rode her side saddle as I didn't feel like bringing her astride saddle (*evil grin*).

Now Chloe has never ridden side saddle, ridden in a double bridle or even ridden Hattie for that matter, so threw her on the saddle with my apron buttoned under her Pony Club jumper and off we went to the warm up field for a mini 10 minute side saddle lesson before her fun showing class, Prettiest Mare. Note Hattie's priceless expression! 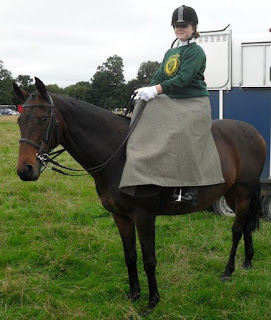 Within the 10 minutes Chloe was trotting Hattie like a pro on BOTH reins (not bouncing either!) on a 20 metre circle and managing to hold the double reins as well (I said she could keep the curb rein very loose so she wouldn't have to worry about it). Seeing this, I had no worry about Chloe riding Hattie by herself with no lead rein so off we went as Prettiest Mare was about to start.

Chloe and Hattie walking around in Prettiest Mare... 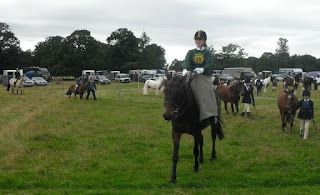 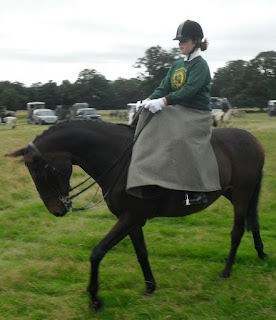 and coming in 3rd place! 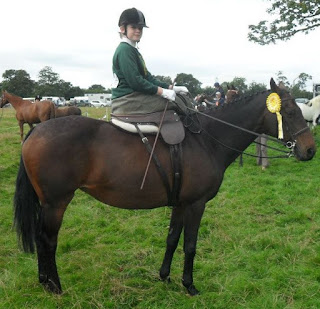 It looks like we have the next generation of side saddle riders folks and they are all naturals!