A Manly Side Saddle

I was curious to know the date of Champy as I figured he was about the 1920's mark due the transitional features he has from both eras of side saddle, i.e. plain sweepy seat from the late Victorian and Edwardian period but pommel and flap style of the 1920's- 1930's "Golden Era" of saddles.

The panels are nailed on at the front so couldn't drop them without taking out the nails (I'll leave that to my saddler when he comes to linen the panels) so carefully pulled the panel edge away approximately where the labels are usually stuck on and peered underneath.

There I spied the edge of a label saying Champion & Wilton and it turns out that Champy was made for a MAN!!!!! 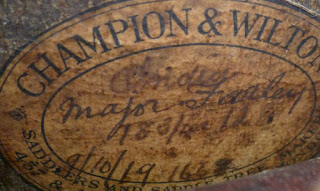 The label says "India" at the top, then "Major Farley" with his saddle measurements underneath, "18 3/4"  for the length and "12" for the seat width. The label has the date of October 9, 1919 (so I wasn't that far off the mark, it IS a transitional style of saddle between the two eras) and the serial number of 1669.

It wasn't unheard of for soldiers who got injured in both world wars and who wanted to continue riding afterwards, to ride in a side saddle but who was this Major Farley? Was India the name of his horse or where the saddle was being sent to?? From his saddle measurements, he would have been around my height, 5'9" as the saddle fits me.

Thanks to the power of the internet, I did find a little more information on Major Farley ...

Reuben Llewelyn Farley was born in 1890 to Reuben Farley (1826- 1899), FIRST Mayor of West Bromwich, Staffordshire and Harrietta E. Fellowes, whom he married in 1887 (his third wife). Reuben Llewelyn was one of five children (3 boys and 2 girls, the two girls died unmarried) and with his two brothers, Captain Charles Finch Farley (1892- 1969) and Francis Dashwood Farley (b.1896), both serving in (and surviving) the first world war with Francis becoming Justice of the Peace for Warwickshire in 1941, Deputy Lieutenant of Warwickshire in 1954 and vice-chairman of the Warwickshire County Council between 1956 and 1958. A partial Farley family tree can be seen here along with the names of Reuben Sr.'s deceased wives, addresses where they lived and even the names of their servants that the family had when Reuben Jr. was a boy! 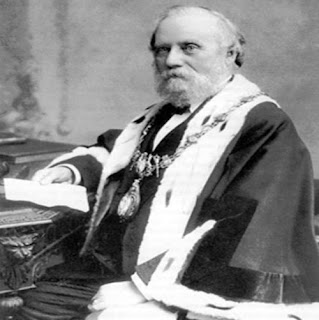 At the start of World War I, Reuben Llewelyn, seems to have enlisted in the Cavalry as the September 8, 1914 edition of the London Gazette has a list of "temporary Second Lieutenants" in the Cavalry of which his name is listed. An interesting note, before the Second World War, cavalry recruits were required to be at least 5'2" tall, but could not exceed 5'9" which confirms that he was probably just eeked in for the height requirements and why his saddle fits me!

In 1920, Major Farley bought Wornditch Hall, which is now a Grade II listed building in Kimbolton, Huntingdon, Cambridgeshire, and which was originally built in the 18th century. The Wornditch Hall and outbuildings (including stables and tack room where Champy lived), are still there to this day and are currently for sale by private treaty if you have several million pounds to spend!! The shop where I bought Champy is about 30 miles from Kimbolton in the same county so it makes sense that perhaps the owner of the antique shop purchased the saddle along with other house contents after Major Farley died (I still have yet to find out this date).

He was still alive in 1952 but I cannot find any mention if he married or not, photos, or any other information about him. There are still descendents of the Farley family around so as I find out more information about Major Farley, I will update this post.