I had the fortune of Major Farley's great nephew, Tom Farley (Francis Dashwood Farley's grandson), contacting me with additional information on his great uncle and kindly sent me a photo of the dashing Major in his uniform.

It is so wonderful to put a face to the name written on an old saddle label and give the history of this side saddle, the human aspect. Tom informed me that his great uncle sadly died in 1954 and never married so had no direct descendants. I am very happy then, that Champy has ended up in my care instead of being in that antique shop's rubbish pile with a forgotten history.

Thank you Tom for all your help! 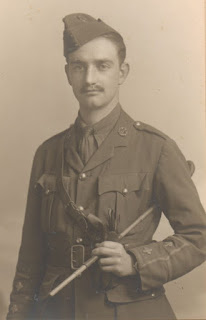 December 7, 2012 update! I was informed by a WWI re-enactor that judging from Major Farley's uniform in the photo, that this picture was taken right before the war in c. 1912- 1913, that he was a volunteer due to his side cap  and that the rank badges on his sleeve cuffs denote that he was a Lieutenant when the photo was taken. In 1917 the rank badges were moved off of the sleeve cuff to the shoulders as they were too conspicuous to snipers!
Posted by sidesaddlegirl at 15:27