You tend to find reversible side saddles pop up all at the same time, some are poor chop 'n weep jobs like this poor old reversible which has been on Ebay several times being passed pillar to post by various disappointed owners... 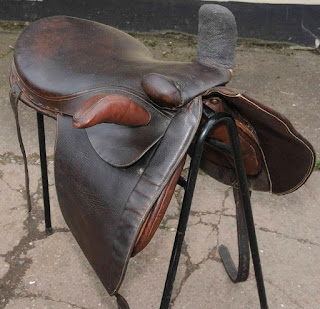 Can you spot the weep worthy chop job on this saddle apart from the chopped off off-side fixed head? Off-side safe has been cut down, bad recover job on the leaping head, no leather covering on the near-side fixed head. I was tempted to bid the first time this saddle was listed by the first seller but when I found out how much it would cost to rebuild the off-side head and undo all the poor alterations, I wisely decline as I don't think my bank or credit card would have been too happy!! Poor saddle, hope the current owner is able to get it restored. 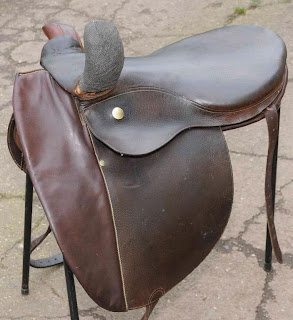 Sometimes you get reversible oddities like Lillian Chaudhary's c. early 1890's reversible side saddle surcingle that she has in her collection! 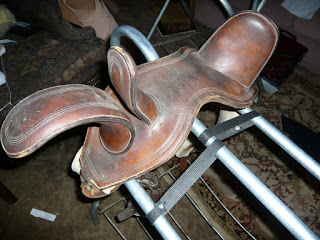 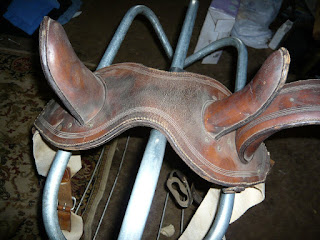 Then you get this Victorian BEAUTY made by Davis, owned by Jocelyn Danby of Danby Equestrian that she just recently bought for her collection and to restore. 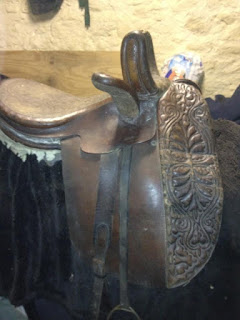 According to Nick Creaton, "This saddle was made approximately between 1884 and 1890. I can tell you however he (Davis) referred to it as his "new style" ladies leather and it cost 3 shillings and sixpence (£17.50p) in 1890 . He made a speciality of Reversible side saddles "much recommended by the medical faculty for delicate and youthful riders, ensuring a graceful and upright figure, and relieving the strain on the different muscles". The cost of this saddle was £11 and a plain hog skin version could be had for £9.50p in 1890. For an extra 10 shillings you could have a double socket leaping head on each side." 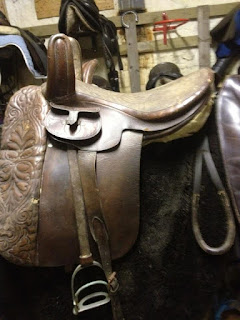 What is neat about this saddle, is that the purse can be swapped to either side as well by using the leaping head socket and attaching it with the leaping head socket plug! Jocelyn said that she could make me a purse like this for my reversible Parker saddle but I will need to get a socket plug made for my saddle as it's missing the original one. I really like these purses on side saddles as they are handy when out hacking to put your phone and a hoof pick in them. 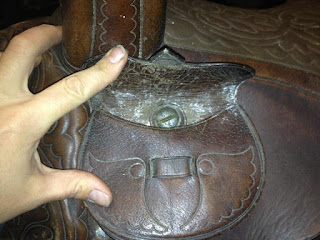 Detail of the beautiful seat and look how open the heads are on the saddle. Sometimes with these fixed head reversibles, the heads are shaped for very small legs so the space is quite narrow between the upright heads but these one seems to have quite ample spacing. The leaping head seems to a more open curve to it as well to suit an adult leg. 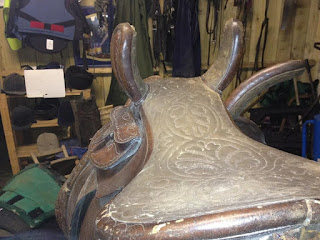