The Open Headed Side Saddle

Often when I get side saddle riders look at my Beck saddle, they comment on the lack of safe at the cutback head and ask why don't I have anything there or why did I "have it chopped off". 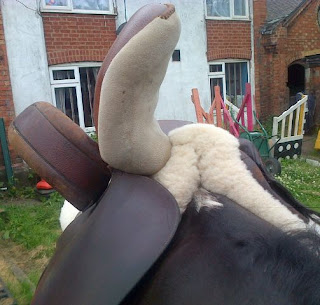 It is a peculiar thing and did feel weird when I first rode on it but after a while, you appreciate the close contact feel of the lack of extended safe.

This style of flap with the lack of extended safe over the cutback head, is called an "open head". According to Nick Creaton, the open head was patented in 1893 and it's purpose was "to leave the withers of the horse quite free, thus allowing the air to pass more freely." He said that "It came about due to some safe's at the time being held responsible for damage to the withers" and that "Leatherby's of London pioneered its use, though Owen, C & W, Mayhew and Whippy also used it". He mentioned that he has also seen it used by other London and provincial saddle makers and actually has an early 1930's Mayhew belonging to one of his pupils, shown on the Museum Gallery page of his website (shown in the last photo on the fourth row from the top which is image 20 of 51, entitled F.W. Mayhew & Co.).

My Beck is from 1898 so fits in with the time frame of when it was first patented. The French saddlers such as Beck, Hermes and Haste used the open head in their turn of the century saddles as well.  Beck was London based as well as in France and all three companies seemed to have worked with each other as you often seen saddles with mixed names such as Beck-Hermes, Hermes-Haste with all three companies having saddles that look very similar to each other.

Although I do use a sheepskin half pad under my Beck (the sheepskin does give a little bit of support to my left leg), the saddle is still relatively close contact and I find Hattie is a little bit more responsive to lesser shifts in position or leg movements than my Mayhew which has a full safe. 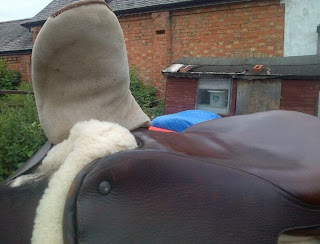