Too Much Excitement For One Week

What a week it has been, literally ups and downs!

Went out for a FAST hack last Wednesday evening with my friend Paul and his daughter Harriet, with them on their polo ponies and me as usual, side saddle on Hattie. I had planned on schooling that evening but was undecided about which side saddle to use, near or off, but in the end, decided on my nearside Mayhew and I'm glad I did.

The hack was a BLAST! LOTS of fast cantering and then we galloped around the big cow field, going over the ridge and furrows in the field. The polo ponies were so fast and Hattie was trying her best to keep up with them and I can see why now that the Mayhew Lissadell was and still is, a favourite for hunting in!! I was laughing all around the field as we went!

All was good until we got to the Ford River, Hattie decided to race Paul's horse and cantered through the river. We were just coming out of it when she tripped on something, went down and I was thrown into the water on the off-side as she fell and rolled onto her right side. Because Hattie fell into Paul's path, his horse ended up jumping Hattie and his daughter was able to stop her horse as she was further behind. As I fell off, I remember thinking to roll away from Hattie and not get pinned under her under the water. It was hard as I had the resistance of the water against me, but managed to do it and felt my boot just getting out from beneath Hattie as she rolled over.

This is why I was glad I was on my nearside Mayhew that day or else I would have been pinned under the pommels of my off-side side saddle because of the direction in which Hattie fell. Enough said.

I was soaked, the saddle was soaked and gouged to heck and Hattie scraped her front knees.

I guess it was a blessing in disguise that we did fall in the water as the water broke my fall (I only suffered a scraped elbow) and the water prevented any grit from getting into Hattie's knees so she had rather clean wounds.

Thank goodness Hattie was not lame but my poor saddle suffered the brunt of the fall.

We had a show on Sunday so it was going to be touch and go as to whether we went or not. Although Hattie was not lame and her wounds were clean, her knees were swollen so did not want to add any weight onto her while they were like that. I spent everyday, twice a day, cold hosing and putting DMSO and Difflam cream on the swollen bits in an attempt to bring the swelling down and it worked.

VERY well. I took a photo every day to show the improvement. I would decide on the Sunday morning as to whether we went or not depending on how she lunged and how the swelling went. 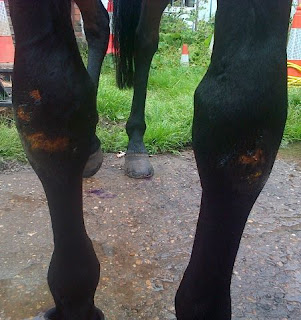 Friday morning (swelling already going down loads and scrapes scabbing over cleanly, look how fast the nearside knee has healed!): 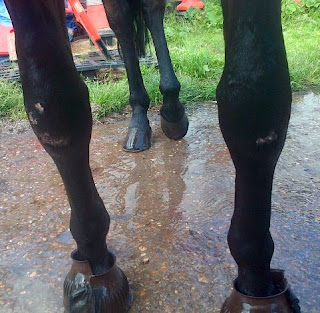 Saturday morning (a little bit of swelling left, left knee has nearly closed up, right knee has clean even scabs): 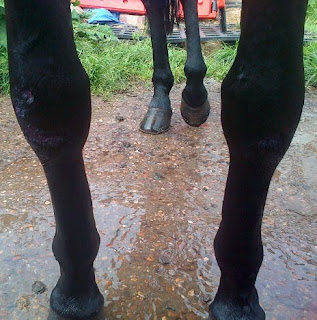 Sunday morning, normal with the exception of clean, even scabby knees!! No lameness and she was striding out while being lunged in the morning. 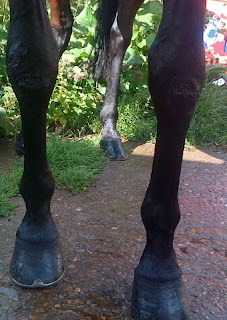 So we packed up and Paul took me to the show where we got a 5th in Best Turned Out (lol, it came down to Hattie's scabby knees), 2nd in Style and Appearance, 3rd in Riding Club Horse (thankfully, it was only a tiny little pole we had to go over), 2nd in Inhand Veteran and then we did some Fun Showing classes where we just walked around. Hattie got 7th in Prettiest Mare (those darn scabs again, lol!) and 4th in Horse The Judge Would Most Like To Take Home.

Hattie was really keen to go at the show and I have been schooling her all week in preparation for our dressage show on the 18th. Her legs are perfectly fine and she is working well so I really do have a Super Horse. Lesson learned though, NEVER hack out without knee boots on!!!

My poor saddle on the other hand, has not faired so well.

After letting it dry naturally for a week, I attempted to clean it on Tuesday night. I tested the fixed head to see if that was sound and there is movement and squeaking. I got out my screw driver and dropped the nearside panel and had a look to see if I could see anything. Well, the first thing I saw, apart from all the mould, was a rivet that had popped up in the metal reinforcement at the gullet. I couldn't see anything else but there is definitely a rivet that has come up. I'm going to take it with me to the Nationals and have the saddlers there have a look to see what they think. I didn't pay a lot for my saddle but I don't want it to be an expensive ornament as it's one of the few saddles I've tried that actually FIT Hattie and don't wreck my hip.

The off-side flap is gouged to heck as is the balance strap on my girth and the off-side nail came out. I can deal with the leather being wrecked but don't want the tree to be!! 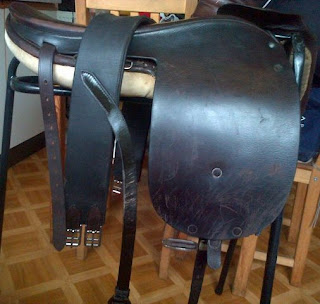 This will be my last post until next week as I'm going to the Nationals today with Sarah Parry of A Bit on the Sidesaddle! I'll be bringing a selection of astride equipment to sell along with a few side saddle bits and bobs and will be bringing my off-side side saddle and pad with shims in case any one would like to try off-side riding.

I hope you will all come check out Sarah's side saddle goodies for horse and rider she will be bringing too! I can't wait to see her selection including this new modern SOFT SHELL technical fabric riding habit!!!! 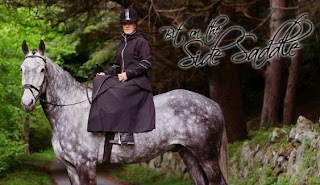 Come by the Bit on the Sidesaddle stand to say "hi"! and for those who can't come, I will be doing my annual Nationals blog post next week.

See you there!
Posted by sidesaddlegirl at 08:42