Well, 2013 has been a VERY busy and successful year for Hattie and I but unfortunately, it meant that this blog was put on the back burner as there are so many hours in a day! I have lots planned for us in 2014 (including my side saddle book and us going to the Nationals) so I will try to keep it updated as much as I can.

Hattie did very well in showing this year and my living room is covered with the rosettes she won for me. 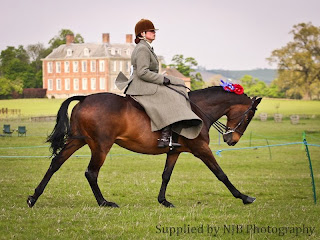 I also bought a new off-side riding habit as my green tweed one wasn't fitting as well as I would have liked it to and my blue Mears one, was just plain TOO big! The tweed one went to a lady how has a reversible side saddle so she bought the off-side apron as well but the Mears habit, went to a lady who only rides on the nearside so I got to keep my navy off-side apron as a schooling apron. I am VERY pleased with my new heavyweight green wool habit, which I ordered from Side Saddles and plan on getting a dark claret colored one made when I save up some more cash.

I have a feeling though, that my new habit will be just as lucky as my old ones!

The July 14, 2013 South Kilworth Riding Club show, we came 7th in Ridden Veteran and 4th in the Style and Appearance class. I wasn't really happy with our placings but at least I know Hattie and I performed our best with spot on rolling transitions and excellent turnout. Couldn't have asked Hattie to do better that day. This show was the last time I wore my blue habit as it was rather large on me that day. I was grateful for it's lightweight fabric as it was blazing hot outside in the sun! 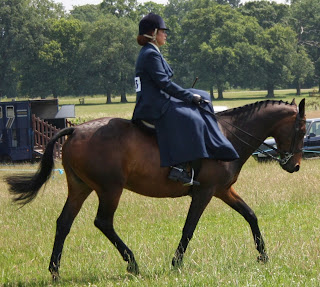 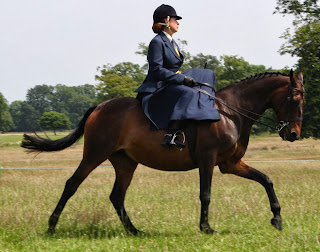 Then a few days later, we had our accident in the Ford River. Hattie and I got scraped up and my Mayhew broke. Thankfully, both our injuries were superficial and Hattie healed up in time (quicker than me!!) for the July 28, 2013 Diamond Equestrian Show as well as the saddle being repaired by Johan of Viking Saddlery.

We came 5th in Best Turned Out (Hattie still had some scabby scrapes which still had purple spray on them), 2nd in Style and Appearance, 7th in Prettiest Mare, 4th in "Horse the Judge Would Like To Take Home" and a good 3rd in Riding Club Horse. 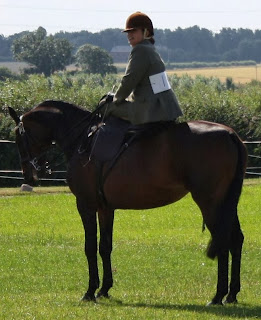 In this photo, you an still see the leftover purple spray marks where she scraped her hip when we went underwater. That stuff does not come off no matter how much shampoo you use!!!! 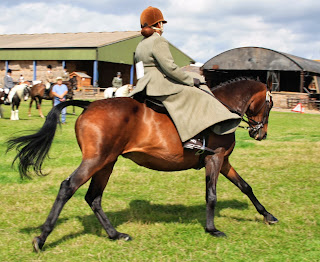 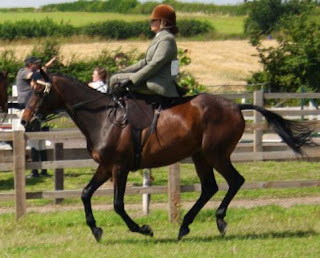 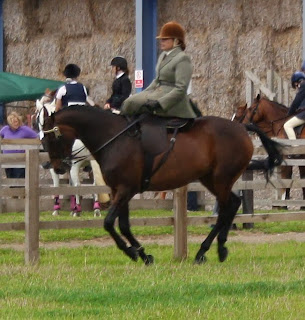 Hard to believe that just a few days before, we both had scabby scraped up knees! Lots of cleanin' 'n prayin' fixed our wounds. 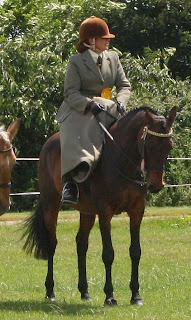 August was spent keeping ourselves fit for the September shows and building up Hattie to be hunting fit for when we went out with the Quorn in October! Our work paid off and at the September 1, 2013 South Kilworth Riding Club Show, we came 4th in Best Turned Out, 6th in Ridden Veteran, 4th in Style and Appearance in the Showing Ring and 2nd in Riding Club Horse which was held in the Hunter Ring. I think next summer we will try some more classes in the Hunter Ring.

Hattie in the Riding Club Horse class held in the hunter ring, we came a respectable 2nd... 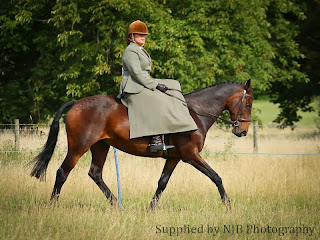 September was a very busy month with a show on 3 out of the 4 weekends. On the 22nd, was the last Diamond Equestrian Show before the championships which were held at the end of October. Hattie did really well coming 2nd in Best Turned Out, 2nd in Style and Appearance and 5th in Riding Club Horse. 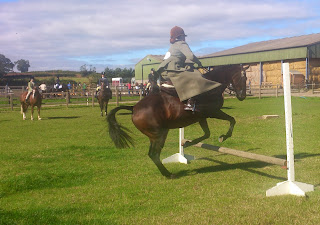 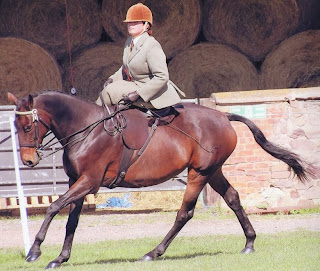 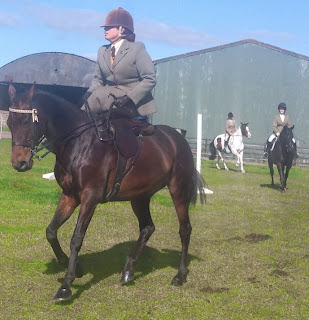 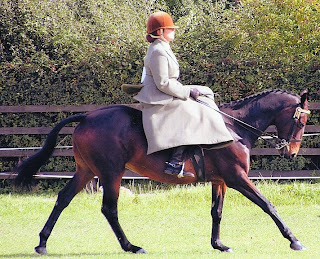 I think the show I had been looking most forward to all year, was the Macmillan Charity Show. It's held at Weston Lawns which is a beautiful facility were show jumping and dressage competitions are regularly held but also because it was for a good cause.

The show was absolutely HUGE! The classes had massive amounts of entries in them so I only entered 2 showing classes that day. Despite only entering two classes, I didn't get home until it was about 9pm!
Hattie was her usual brilliant self and we really had to work for our rosettes as we had very stiff competition. I have never been so knackered after showing classes as much as I was that day but I feel that we really earned our rosettes.

We came 4th in the Ridden Showing class out of 35 riders (I was the only side saddle rider and of course, on the off-side!) and the judge decided to split the class to under 14.2hh and over 14.2hh due to the sheer number of riders she was going to have to judge! Ridden Showing was judged on turnout, the rider's equitation and the horse's conformation and way of going, so everything really! This was the last show in which I wore my tweed habit to.

First all the over 14.2's went round and did our individual shows, then the ponies came in and had their turn. Then the judge chose the top 6 in each section and we had to do an individual show again for the judge to whittle it down. Hattie and I held it together and nailed out transitions so they were rolling and smooth. We truly earned that 4th place!

The second ridden class, Riding Club Horse, wasn't held until late afternoon as there was an inhand class between the two ridden showing classes which took hours to get through due to the high number of entries. It was also a huge class, about 27 riders and we came 5th in that so not too shabby at all! It got rather exciting when we all had to canter around the ring at the same time and Hattie got rather strong but at least she didn't jump out of the ring like some of the horses did!

In our individual show, we show canter extension down the long side and we jumped the jump on both reins. I think Hattie was starting to lose it as it had been a long hot day as she was a bit strong and out transitions weren't as smooth or rolling as they had been earlier but still, she held it together long enough to earn our rosette. 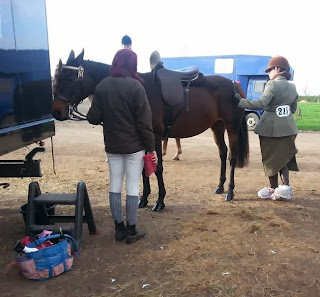 Hattie in the zone... 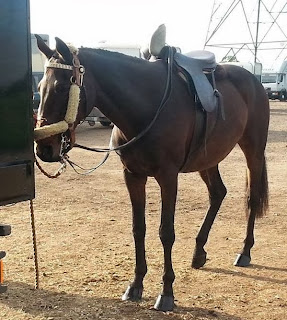 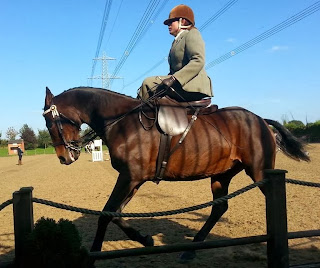 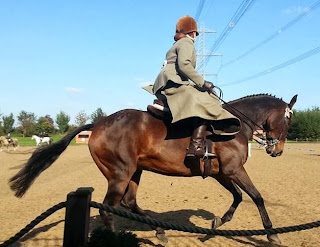 Hattie getting a "bit" strong with everyone cantering around in the Riding Club Horse class... 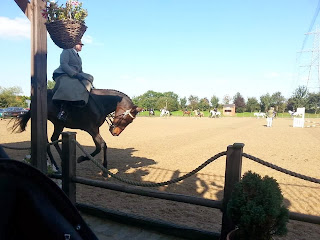 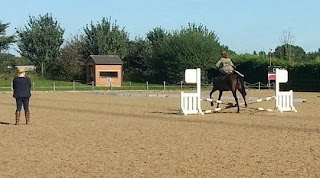 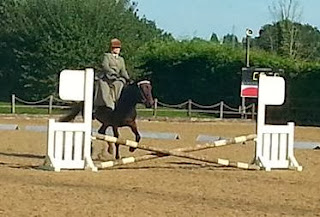 The Quorn Hunt chapter comes tomorrow but the last showing show of the season was the Diamond Equestrian Championships which was held on October 27, two days after we had been hunting!! This show was for all those competitors who placed 1-3 at any of the 4 Diamond Equestrian shows held over 2013 s cream of the crop really! It was a windy and rainy day but Hattie was her usual brilliant self and armed with my new riding habit, we came 1st in Style and Appearnace, 1st in In-hand Best Condition, 2nd in Best Turned Out, 2nd in Riding Club Horse, 3rd in In-hand Veteran PLUS two Champion sashes, one for In-hand and one for ridden! 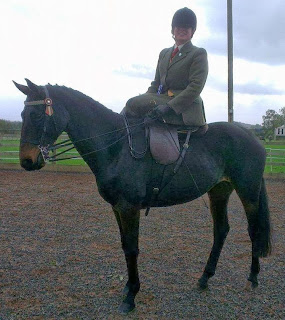 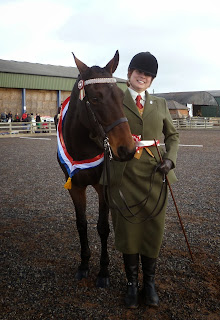 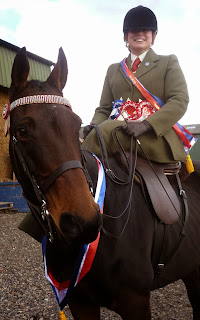 Hattie still wasn't done yet with wining rosettes and we also won two reserve champions and a 3rd place champion at the South Kilworth Riding Club end of season points in November. 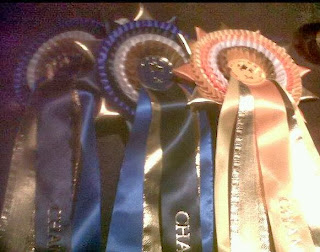 Roll on next year's shows!