Not only did Hattie do very well in showing this year but we also did something that we have never done before, hunt side saddle.

On October 25, 2013, The Quorn Hunt Opening Meet Side Saddle day organized by Emma Brown, was held. I had NEVER hunted astride or aside before and as far as I know, Hattie never did either (I have since found out that she did used to go out with the Cottesmore sometimes)!

To get ourselves hunting fit, we spent August and September schooling in the field over uneven ground and I had a lesson with Roger Philpot from Pittern Hill Stables, who came out to fit my off-side Champion & Wilton and to given me a lesson. He tweaked my position and got me to put my weight onto the front of my left leg (since I'm riding on the off-side) which made me ride more forward and allowed my hips to have more of a "rolling sliding" feeling. This "forward seat" position allows you to jump easier and absorb the movement of the horse easier when riding over uneven terrain. This is why in the showing photos taken in September and October, you can see that my position when cantering and jumping is a lot more forward- and better, than it had been. 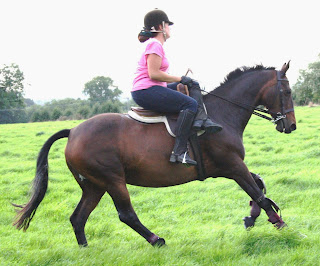 Roger gave me the history of my side saddle, he told me that it had been ridden in by Lady Leigh in the 1940's whose family had owned Stoneleigh Estate and it had been in her family since it was made, about 1908. I found out that Lady Leigh had become disabled in a hunting accident so she had to ride in an off-side side saddle.

So armed with Roger's knowledge, my hunting cap and Lady Leigh's Champion & Wilton, off we went hunting!

Hunting started at 11:00am but we got there early to get ready. There were already lots of people there and there were lots of ladies walking around in habits so I didn't feel like an oddity, like how I usualy feel at shows!

Hattie and I all tacked up and ready to go. This was my new green habit's first outing and my first long ride in my Champion & Wilton. My saddler, Roger Whitehead, adjusted the shims in my saddle and made a nice and neat thick shim as Hattie had lost her summer weight with all the fittening work we had been doing. He also added a point strap on the nearside point to keep the saddle put as we all know where Hattie's saddles like to go!! 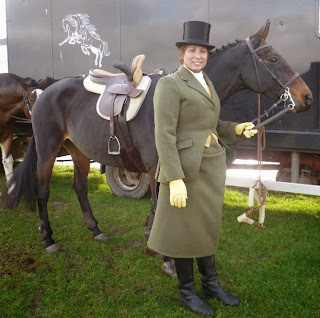 Notice how I'm NOT wearing a spur!!!! 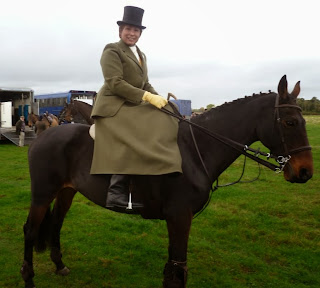 Hattie and I saying "good morning" to the hunt masters... 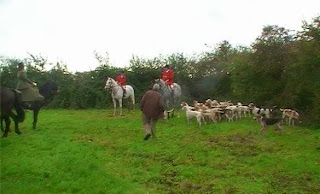 Emma Brown had wanted to beat last year's Quorn Opening Meet side saddle turnout of 40 side saddle riders and we did it this year with I believe, 45! 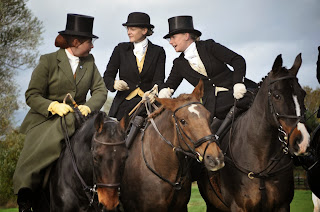 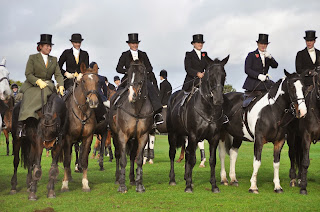 I was the only off-side rider but in these videos by Russ Cross, you can see all of us side saddle ladies and one man!

More photos can be seen on the Equestrian Life Magazine website and on the Rose Rodgers wesbite. 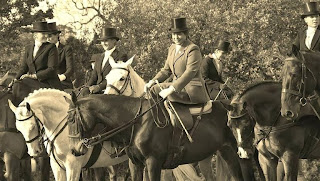 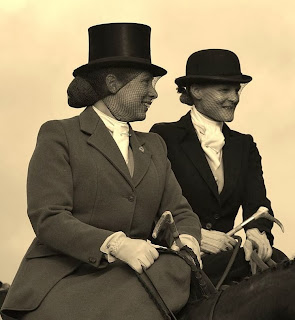 Hattie thought the whole thing was great too, I'm sure she thought it was the strangest showing show she'd ever been too!! When we set off, she went sideways and backwards as she was so excited to go. I did end up changing into my skull cap as I didn't trust myself not to come off Hattie and ruin my antique top hat and my head!

Hattie was VERY fast that day and even with the pelham on, I couldn't stop her. We galloped across a downhill field where at the bottom, a huntsman was holding open a gate for everyone to go through to a farmyard. Well, that open gate was getting closer and closer and Hattie was showing no signs of stopping. At the last second so I wouldn't crash into anyone's horses bums, we swerved to the right (made sure to keep my left shoulder BAAAAAAAAAAAAAACK) and Hattie slide to a stop. The huntsman's face was priceless and said that it "was a good stop!".

It was exhilarating, if not slightly terrifying, across the fields and even though we have galloped out on our hacks, Hattie was never as fast as she was out hunting. It was like she had  hidden gear which kicked in! My saddle was very secure and comfortable and I wouldn't have managed to stay out as long as we did on a nearside side saddle.

We we're out for about 3 hours before I decided to call it a day for Hattie and I. She was getting more and more wound up and excited, trying to canter and buck on the road too, so we turned around and tried to find out way back to the field where all the lorries were parked. Unfortunately, I couldn't remember the way back and would have had to go through the farm yard gate where Hattie had done her sliding stop so hacked up to the main road in Melton Mowbray, the A607, and found our way back home. It's a good thing Hattie is good in traffic as that road is very busy and fast. I wonder what all the drivers mad of seeing a lone side saddle rider hacking down a busy A-road?! I did thank every car that passed carefully beside us but had some silly woman shout at us to ride on the grass verge. 1) It's not in the Highway Code and horses are permitted on an A-road, 2) It was not safe to ride on the grass verge as there were big traffic road sign poles along it which we wouldn't have been able to ride under or through, 3) If Hattie spooked while on the grass verge and went sideways onto the road, cars would have been driving at their normal speed so would have hit us. At least if we are on the road, cars are forced to slow down and drive safely.

Sarah and I heading out... 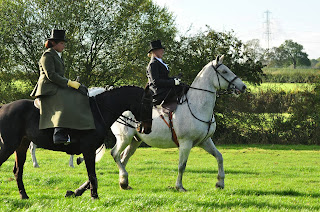 It was a brilliant day and I felt proud to be a part of hunting history and especially on a historic saddle too.