To kick off the NEW year, I thought I would write about something OLD. May I introduce Long Tall Sally? 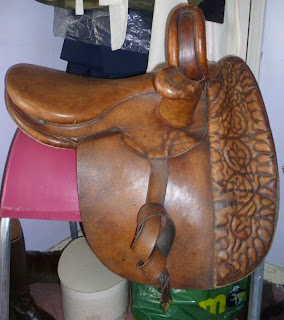 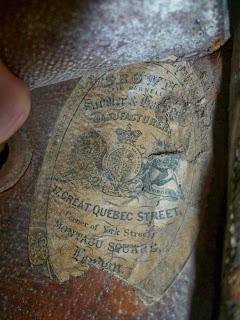 Great Quebec Street was renamed Upper Montagu Street so the saddlery would have been located at one of the four corners of York street right where the Google Maps marker is. 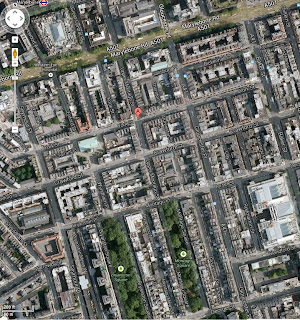 First, the saddle had to come from Germany as it was owned by my friend Berit. She wanted to sell it as she wanted a more modern saddle which was handy, as I had been looking for an antique off-side side saddle for historic costume classes. Berit is tall like me and the saddle fit her, so I knew it would fit me and the tree width looked like it would suit Hattie perfectly. To raise the funds for it, I decided to take the plunge and sell off my two remaining nearside side saddles, my Mayhew and my 1860's Grand Old Lady and use the money to buy Berit's saddle. My two nearside saddles weren't being used very much due to my hip so there was no point in me keeping saddles that cause me pain so now I am officially an off-side rider only!

Photo of Long Tall Sally taken by Berit just before her long journey to England from Germany... 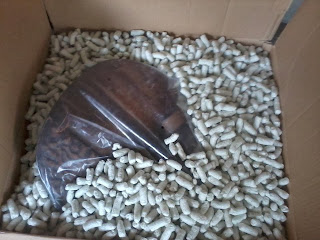 I was so excited when my "new" saddle came! She is a BIG girl which is why I named her Long Tall Sally. She even has a large near-side purse (which needs a new button attaching to it) which is built into the nearside overgirth skirt. She doesn't have any point straps, only the three normal billets so Hattie's girths which have attached balance girths, are perfect for it. To be honest, I'm not going to bother getting point straps attached to it as the saddle does not move forward on Hattie, it's actually quite a good fit and Hattie needs combi girths any ways.

I was so excited that I bought an old 1860's platform stirrup iron to display her with but for riding, I use my modern Cope's iron. 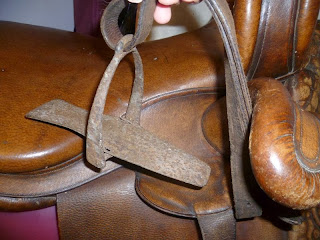 She has a cutbackless head which clears Hattie's withers well (she seems to suit these REALLY old saddles) and the tree points are equally long on both sides which makes for a very stable saddle. The tree also seems to follow Hattie's lines well but I wouldn't be able to use a pad underneath as it's such a close fit. I'll need to get the panels relined with new serge (not going to bother with linen as Hattie seems to prefer serge on her back and it offers more grip) and I want to get some Oakwood conditioned for the leather to keep it in good condition. The nearside tree tip has broken at some point (probably from being dropped over the past 150 years but once my saddler drops the panels to reline it, I will be able to fix the tip without difficulty using some wood glue. It's not too bad as is but it's one of those little jobs that will make my saddle perfect.

The nearside horn isn't as pronounced as my other 1860's saddle had been and you can see the large pocket with additional D-rings attached underneath it so this may have been a travelling side saddle. 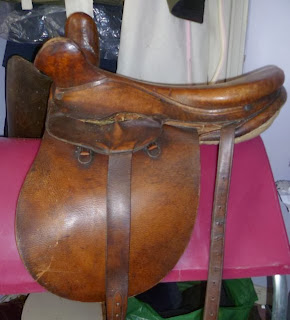 People often say that these old early Victorian side saddles ride uphill and are not suited for modern riding, while I agree to a point, this one is incredibly comfortable. While I wouldn't jump or doing anything strenuous like hunting or long hacks, I would say that sometimes these Old Ladies can still have useful lives as light hacking saddles and definitely in historic costume classes.

I have a print from 1868 showing Le Vent, a dark bay Arabian, winning the Ladies Hack class at a London show. He was ridden in an off-side side saddle very similar to my one. 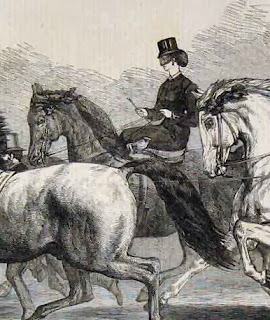 When I put Long Tall Sally on Hattie, she did look the typical uphill built antique Victorian saddle but with a small fleece riser underneath, she did not feel or ride uphill at all. In fact, it was like God took a mould of my bum and said "Let there be a saddle!". 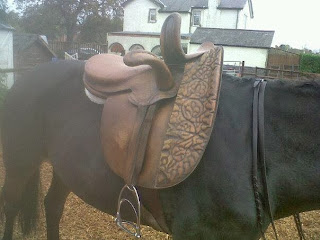 We schooled for a bit in it to see how she rode and then when I was happy with how it stayed on Hattie's back, we went out for a hack and we just didn't walk but trotted through the Ford river and cantered over the ridge and furrow grass verges. My bum did not move from that saddle and my left leg stayed firmly against the ornately embroidered safe. I think Long Tall Sally was happy that she was being taken out for a spin again! 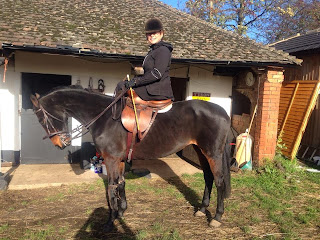 Never mind that I forgot to do up the noseband on my bridle for the photo (don't worry, my yard owner did it up for me before we set off!) but Hattie was so light in this saddle. When we were schooling, she was working in an outline with the lightest of rein contact, just like how old Victorian books on riding for ladies say how a Lady's Horse should ride! I have never had her so light in the rein before so Hattie obviously REALLY likes this saddle!

Long Tall Sally is also a REALLY big saddle, her seat length is 21" from the front of the fixed head but the off-side flap is also quite large as is typical of 1860's saddle. Her seat width is the biggest I have ever seen on a side saddle, 16" wide!!! I like the position of the fixed head on it too, it suits my leg nicely and the leaping head is also very long. 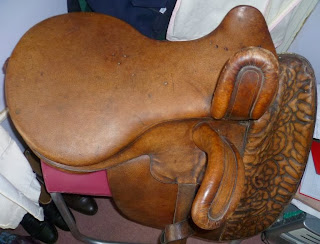 It is interesting to compare these large Victorian saddles on modern horses and Victorian ones. Although Hattie is 15.3hh, my big saddle looks more in proportion to her build than the one shown on the Victorian horse in my antique Victorian photo from the late 1860's! 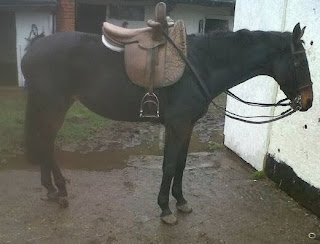 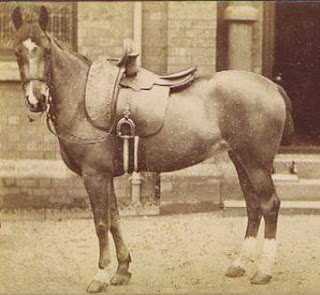