I think winter has finally arrived to my part of the world as all the cars outside were thick with frost when I woke up this morning and the stable yard was crunchy with frozen mud and puddles. We have been having a lot of rain here lately so the Ford River near to my stable has been quite high lately.

With all the poor weather, I have not had a chance to ride side saddle as much as I have wanted to (been working on my book about Victorian and early 20th century riding habits instead!) but as the morning warmed up today, I got out my reversible saddle to take it for a spin to see how it rode with the safe I had made for it. I had to put three thick pads underneath it as the tree is too wide for Hattie and then we went out for a short hack.

The Ford River had gone down since yesterday so we went through it and we did some trotting and cantering in the saddle but since the saddle is too wide, it was rolling a bit. I also need the upright head padded out with a Queen since it has made for a larger leg than mine.

I do hope the weather dries up a bit soon as the Dianas of the Chase race will be held soon on January 25 and I can't wait to go and watch it this year! 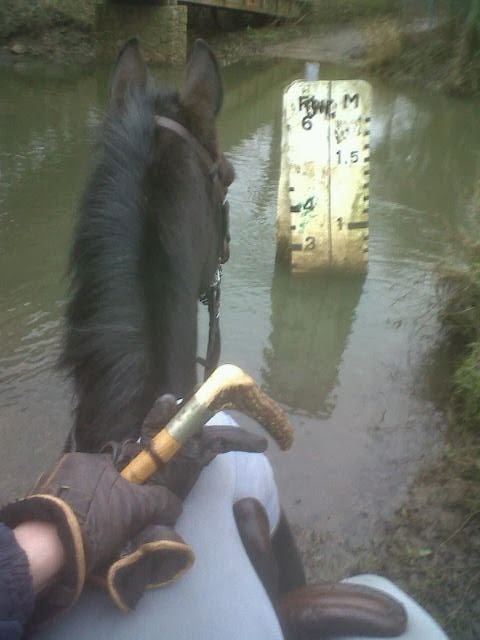 Do we have to go through it mum?