The Area 5 Show at Pittern Hill!

Well, showing season begun last month with Hattie and I going to the Area 5 Novice Show held at Pittern Hill Stables in the next county, Warwickshire. I have always wanted to go to Pittern Hill so was VERY excited to be able to show there. My friend Sarah Parry, came along too as I said she could take Hattie in a class too so she did the Walk/Trot class as she had only ridden Hattie twice before briefly and isn't an off-side rider! Luckily we are both the same dress size and height so she was able to borrow my habit and fit into my saddles so off we went for a full day of side saddle showing!

Unfortunately, my new Megan saddle was at the saddlers getting the flocked adjusted for Hattie and with my saddler also being a hunt rider with the season still in full force, he wasn't able to get it back to me in time for the show which was disappointing, so I took my Beck for the equitation classes and my Champion & Wilton for the Style & Jump class.

It was a VERY windy day but thankfully, there is an indoor school at Pittern Hill so the show ended up being held in there as it was quite stormy out. Sarah's class was first and she did have some stiff competition although she was the only off-side rider. The judges were intrigued with my offside 1898 Beck saddle! Some horses were spooking at the wind clattering the sides of the area but Hattie was not fazed and Sarah got a very respectable 5th place out of such a large class. She even remembered to keep her LEFT shoulder back too, well done Sarah!! 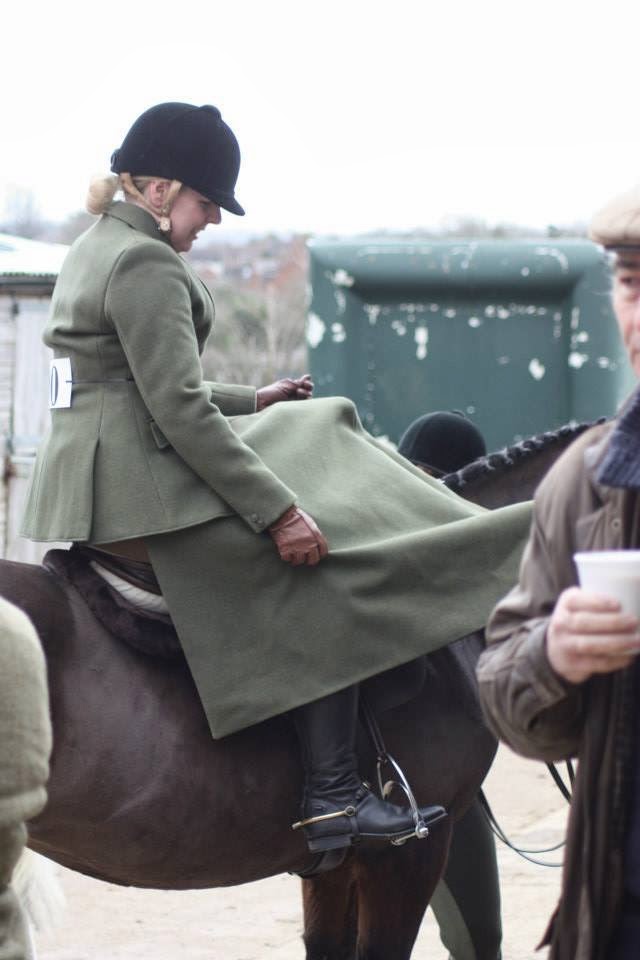 Sarah and Hattie in the Walk/Trot class... 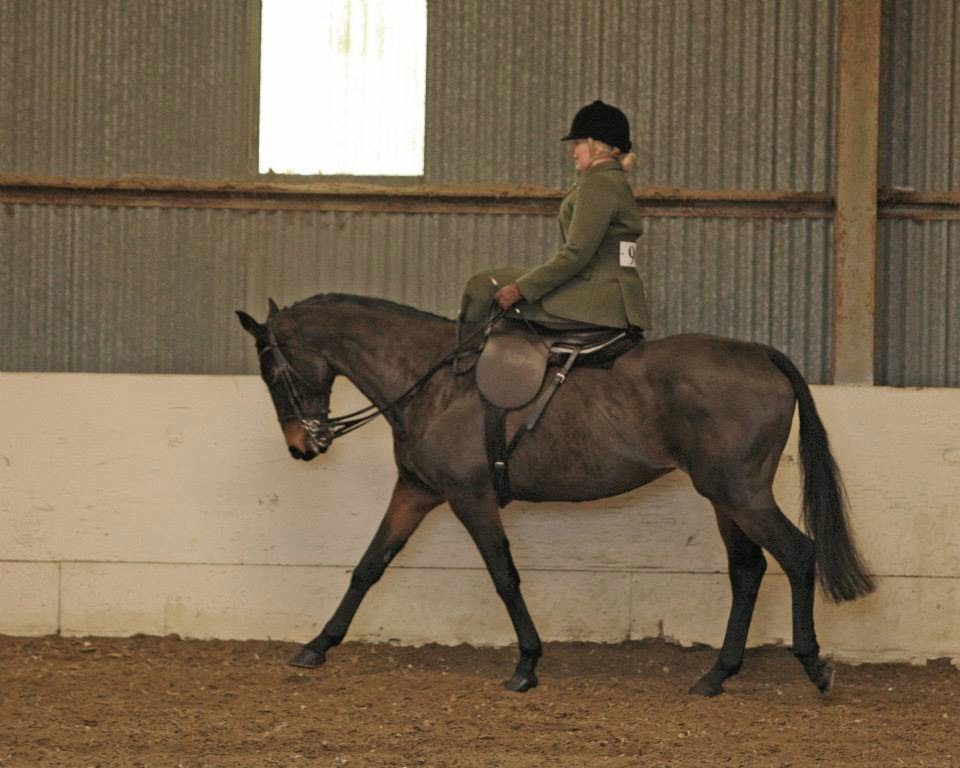 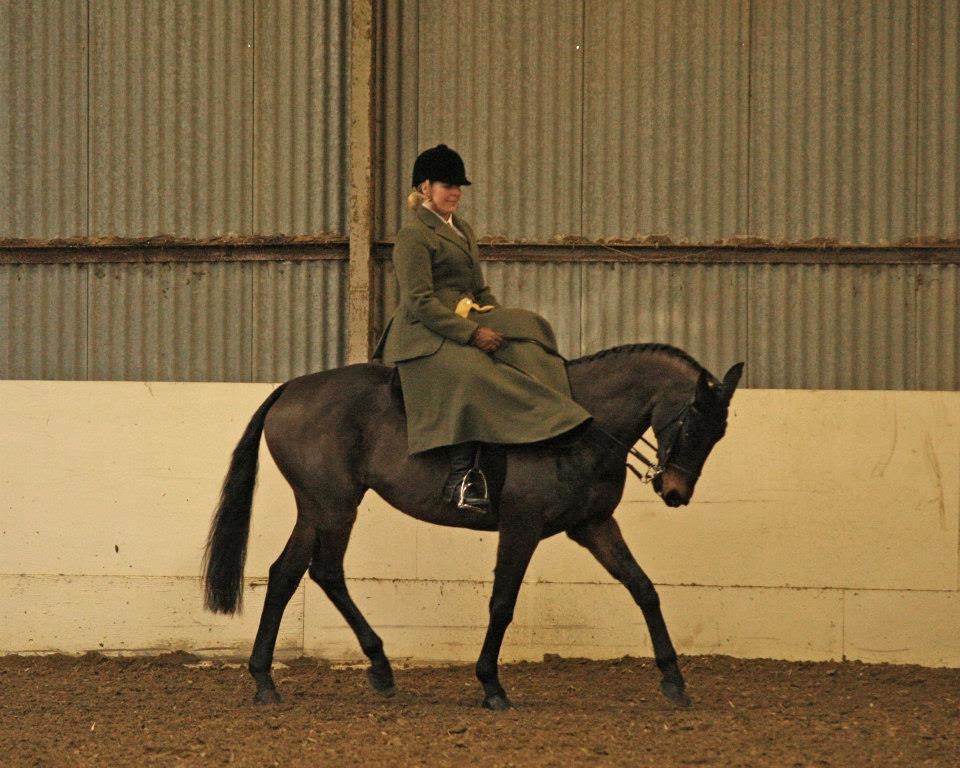 Hattie and I in the Novice Equitation class were we came first but unfortunately, were the only entrant in that class! I think we definitely earned our rosette as Hattie did nice rolling transitions, was forward and was working in a nice elastic contact even with the wind banging the metal walls. I don't think we could have done a better job so was pleased how Hattie performed. 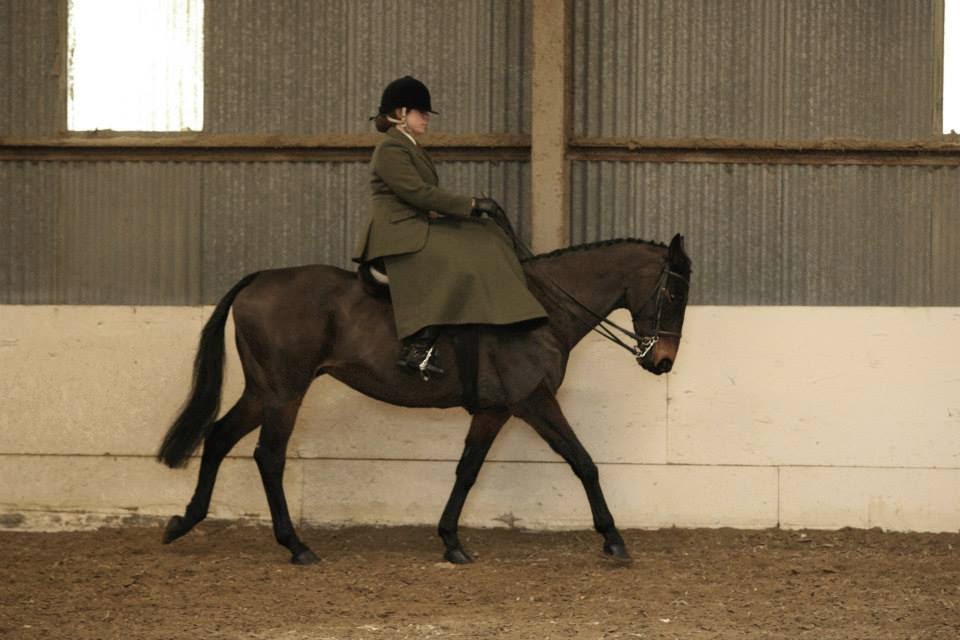 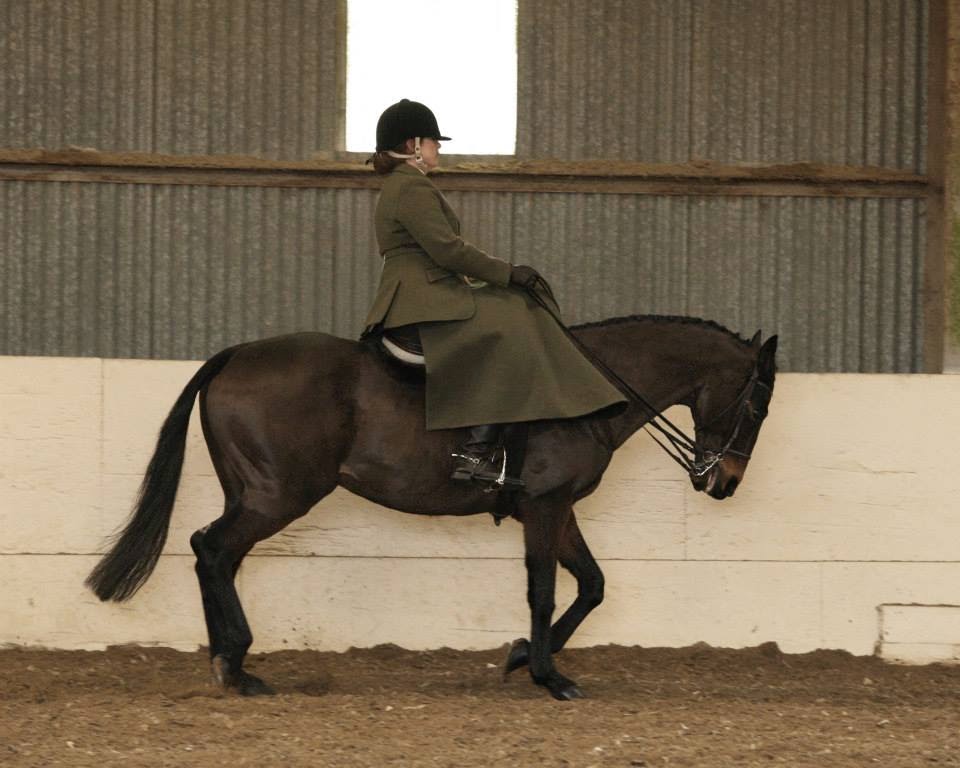 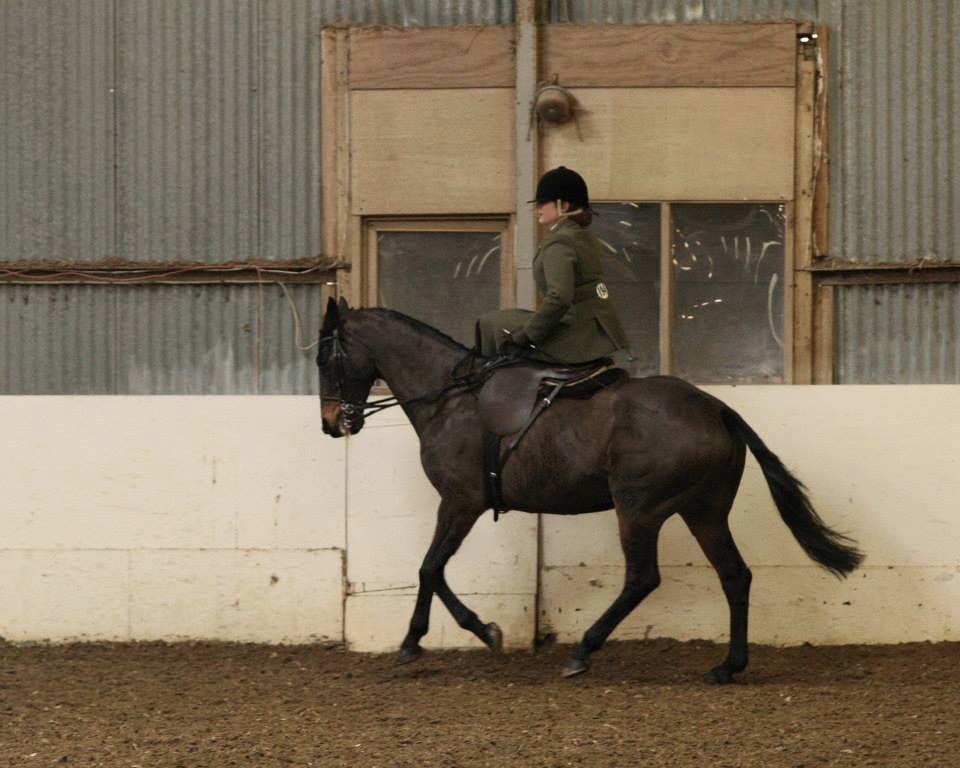 The judge inspecting our turnout, I told her the history of my saddle as well. She suggested I pad up the fixed head a bit more to bring my left leg more over to the nearside. I already have a queen on the fixed head but think I could just add something on top of it and vetrap it on. 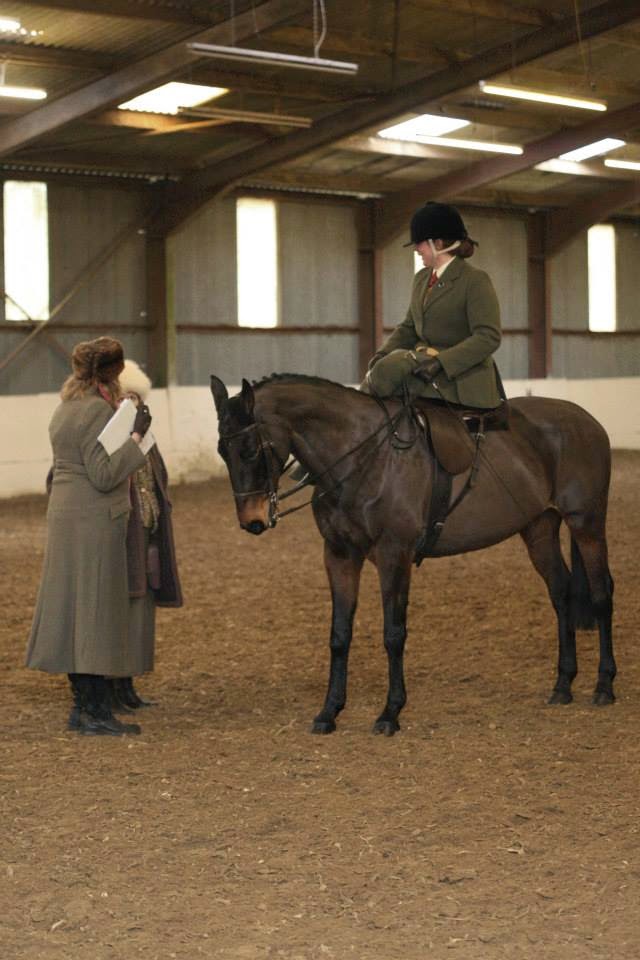 Lovely Hattie being her brilliant self... 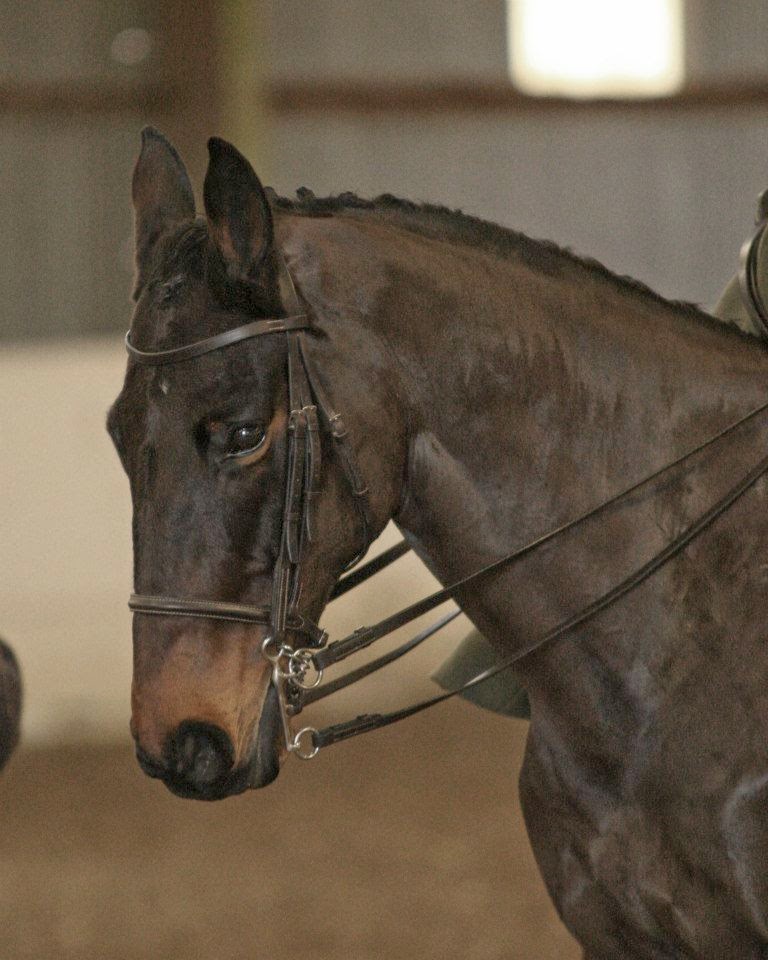 Next was the Best Side Saddle Horse & Pony class which the horse is judged on it's suitability as a side saddle mount. You can also compete within this class in different categories as well such as Hunter, Cob, Veteran, Hack, Riding Horse, etc. I wasn't sure whether to compete her as a Hack or Riding Horse as some judges have told me she is a Riding Horse and others have said she is a Show Hack but decided in the end to show as a Riding Horse as she doesn't have as showy paces as a hack does and has a bit more bone than one. We came 4th in this class and the judge said she would have shown her as a Hack as Hattie is fine boned but then I thought that maybe she looked finer boned than usual as all the other horses she was competing against, were big hunter types or cobs. I think this is something I am going to have to investigate further but experimenting at different shows as a Hack and as a Riding Horse and seeing what the judges say but personally, I think she is more Riding Horse.

Waiting before our class. The blue armband shows that we were competing as a Riding Horse, KI also put her ribbon browband bridle on which is appropriate for Riding Horses and Hacks (plus, it suits her too!)... 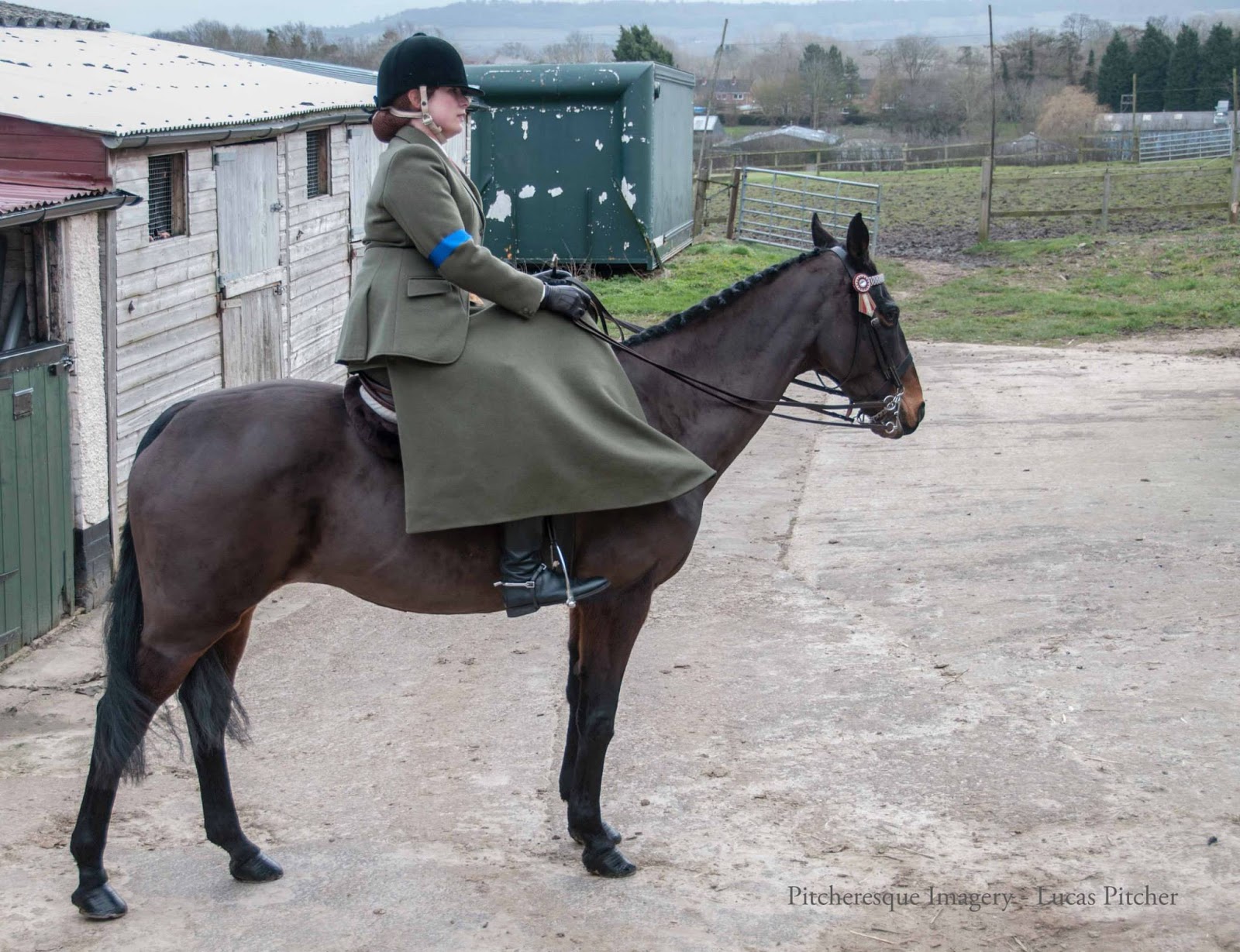 Hattie performing wonderfully in the Best Side Saddle Horse & Pony class, she did not put a foot wrong... 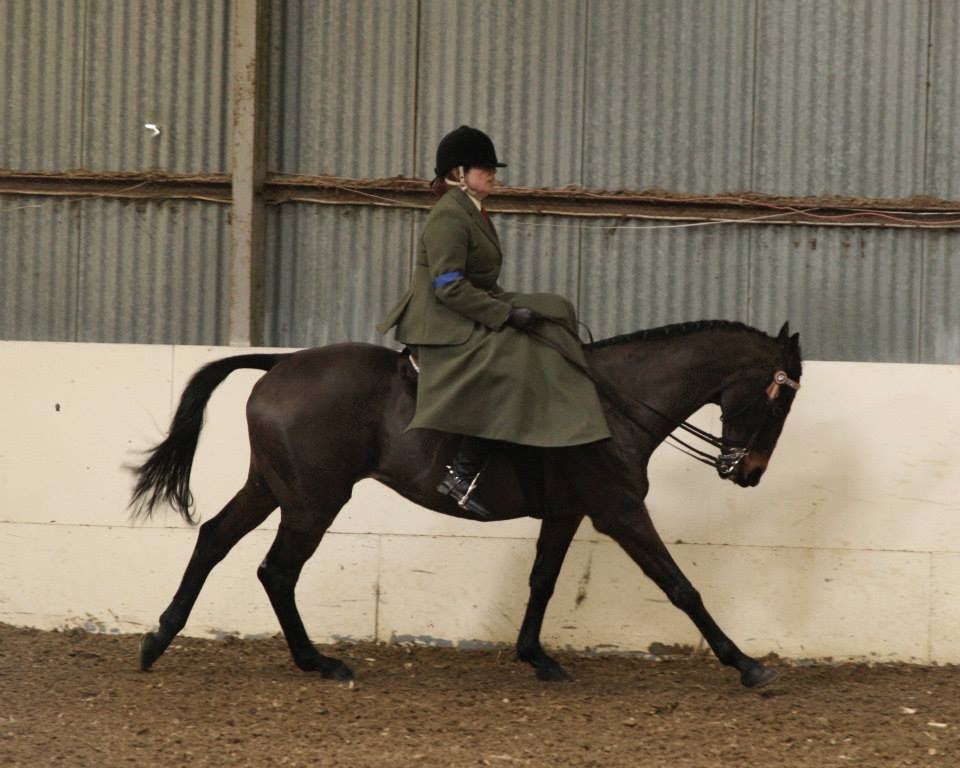 Our last class of the day was Style & Jump where your horse's way of going and jumping style are judged. To be honest, I was in two minds about entering this class as I knew Hattie would get revved up over the jumps and I'm not that confident doing it. The good thing about this class at the Novice shows, is that you can ask the judge to alter the heights for you which was good as our warm up was atrocious.

I wish I was braver jumping but panic paralyses me and then Hattie goes nuts and speeds off with me or refuses and runs out. The jumps in the class weren't any higher than what we had been doing at home the previous week- 2ft... 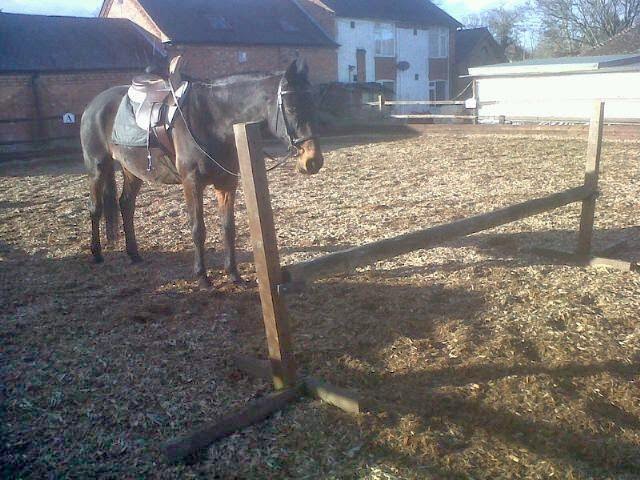 but may as well been 7'6" at the show as blind panic set in. The judge kindly lowered them for me to cross poles and Ginny Oakley gave me some help and advice in the warm-up too. There were 3 jumps in the class and our first two were good but on our approach to the last jump, I cut the corner slightly which caused Hattie to become disengaged and she refused and ran out on the jump. I think we were both to blame, me for cutting the corner and Hattie for being naughty and taking advantage of the situation as she still could have popped over such a tiny jump even with being disengaged. The judge said the same thing too so it wasn't just me, lol! I was shaking when my go was finished and felt like crying as I had panicked so much and was glad that it was over!

We came last (4th out of 4)  but to be honest, I didn't care what placing I got as I had to do that class for my own mental well being and make myself  "man up". At least I did it, ended up in one piece and the fact that we got a rosette was a bonus!! 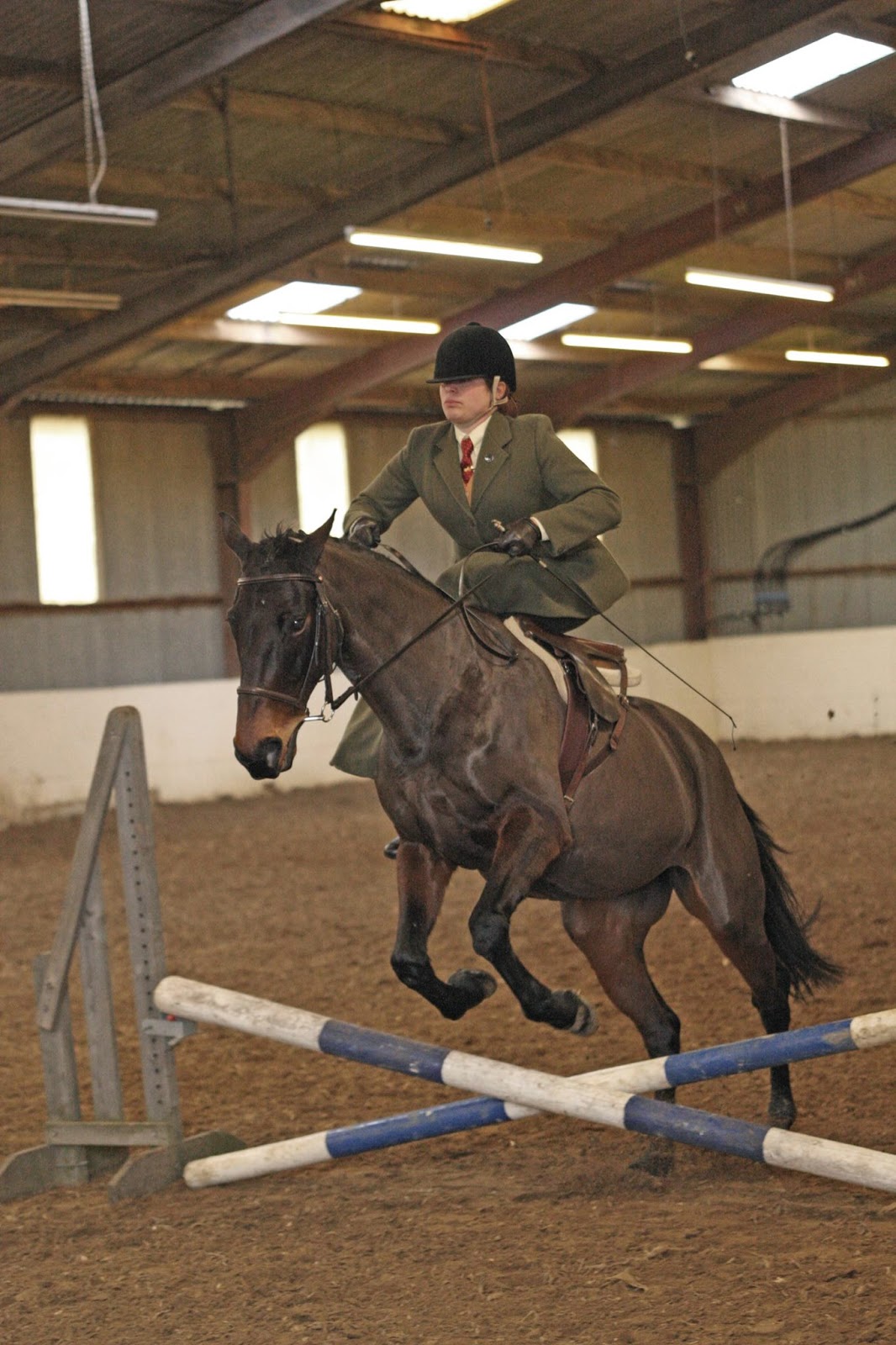 (Photo courtesy of Jennie Daniels)
Posted by sidesaddlegirl at 22:29