A Less Than Regal Queen

At the last side saddle show I went to, the judged suggested that I add a queen to my Beck to get my left leg over a bit more over to the nearside. Although I already have a queen on my Beck as it has such a tiny pommel, I never realized still how far over to the off-side my leg was. Over the past few weeks, I have been experimenting with different "queens", ones made from foam, gloves, anything really and then I tried Hattie's eye wiping towel folded up several times. 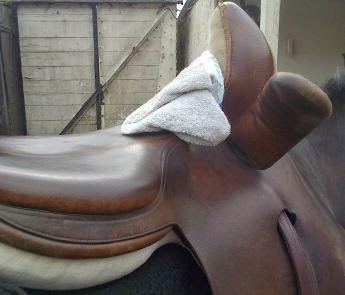 I have it placed a bit further back from the front of the fixed head so I can still get my left leg around it comfortably yet it still supports my thigh. I don't exactly have the smallest thighs on the planet so it's surprising that I need a queen on the saddle but there you go!

Unfortunately, my new queen doesn't live up to it's regal title as it's rather stained with purple spray stains, Hattie eye gunk and goodness knows what else off that horse! Still, it will make it's appearance underneath my habit at our next show on Sunday.