The other day Lil' Miss came to live with me. She had been advertised on Ebay by her owner as the family were moving into a smaller house for their retirement and couldn't take her with them. Lil' Miss's home wasn't that far from my work so I went to see her while the auction was live but decided against bidding as she was VERY VERY narrow, too narrow for Hattie and the seat size was child size. I couldn't afford the opening bid for something that I wouldn't be able to ride on and the auction ended without any bids. 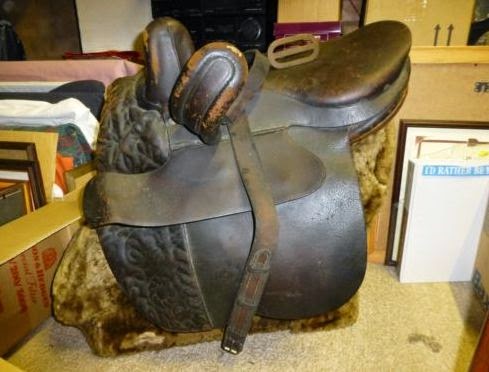 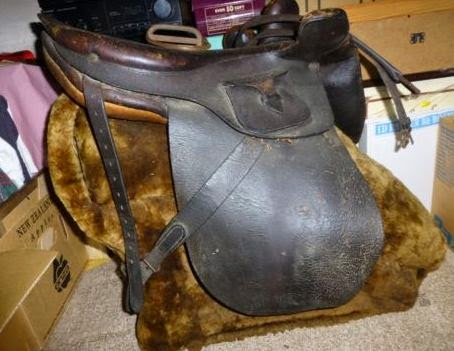 Then out of the blue, Lil' Miss's owner rang me up and asked if I would like her as they really couldn't take and and had to downsize soon since they were moving and then she showed up on my doorstep!

Well, I had to bring her down the stable to meet Hattie and she actually how narrow she was. It turns out REALLY narrow. Hattie's astride saddle is a 29 Stubben which equals to a "narrow medium/ medium" in most saddle brands is a bit wide on her, 28 (narrow-medium/ narrow) would fit her better. Lil' Miss looks like she would be even narrower than the Stubben size 27 which is "extra narrow". You can see in the photos how narrow it is in the shoulders which makes it ride uphill as it can't sit down properly on Hattie. 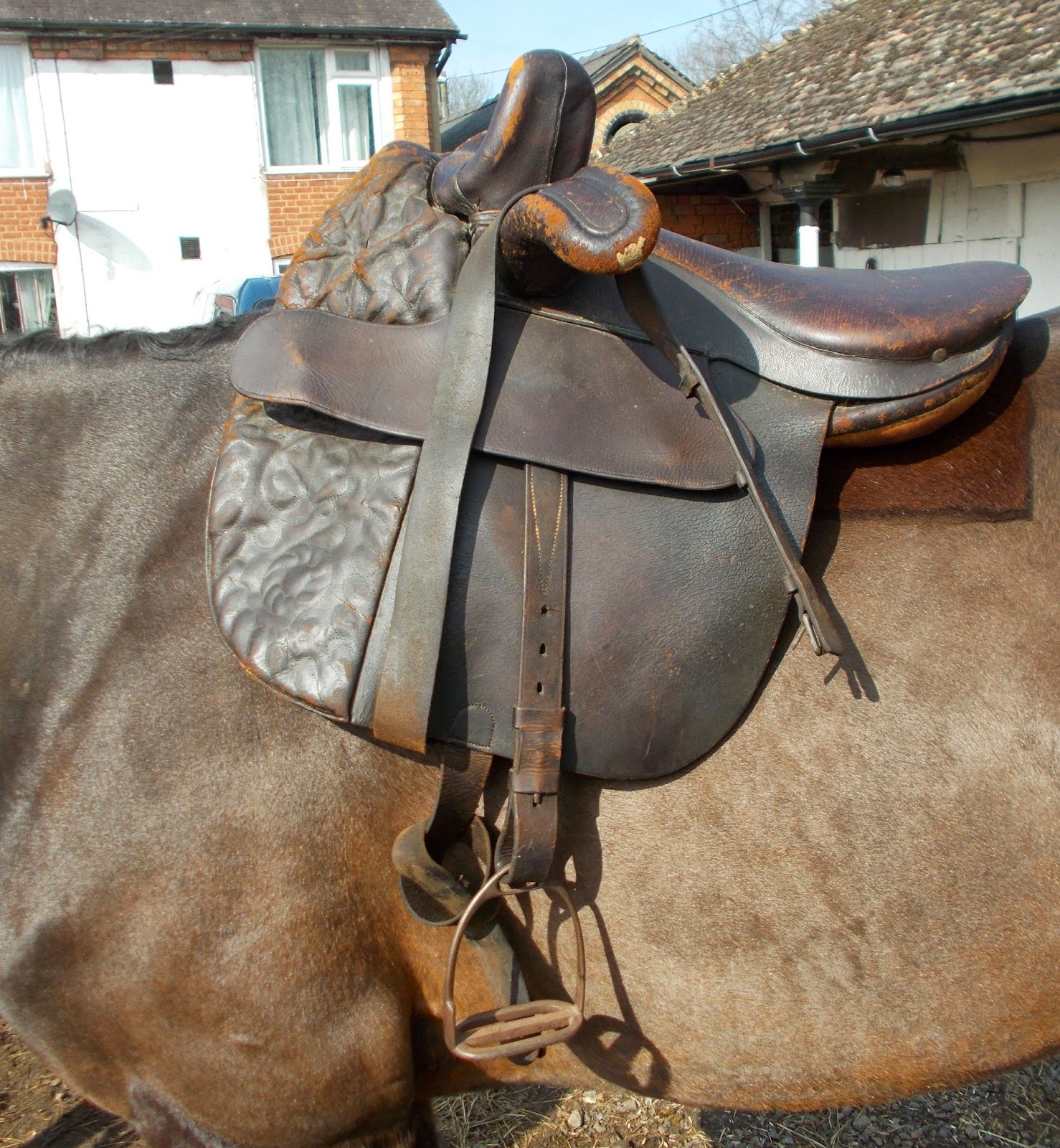 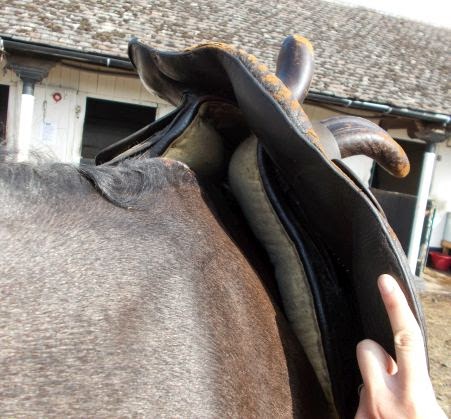 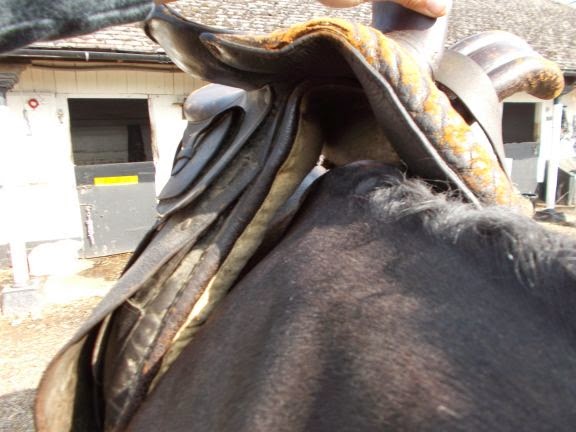 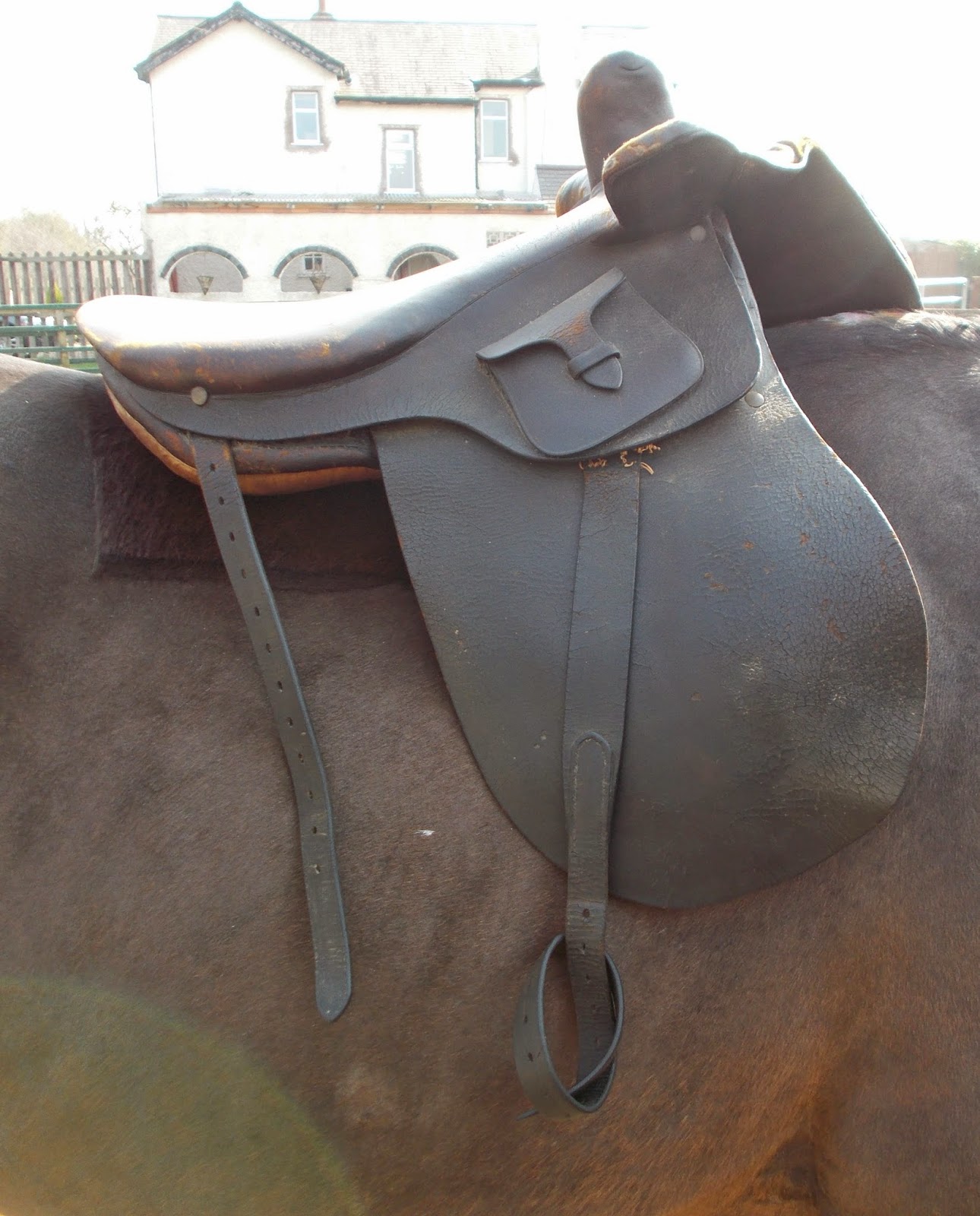 I put Hattie's wither tracing against the saddle to show how narrow it is in the shoulders... 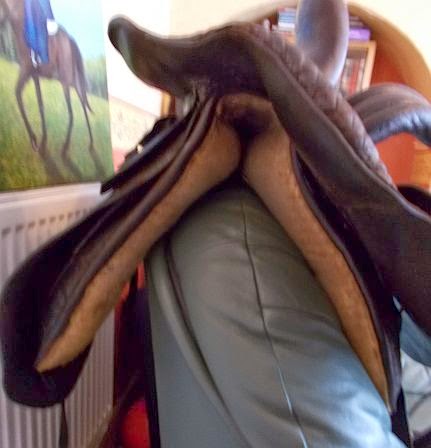 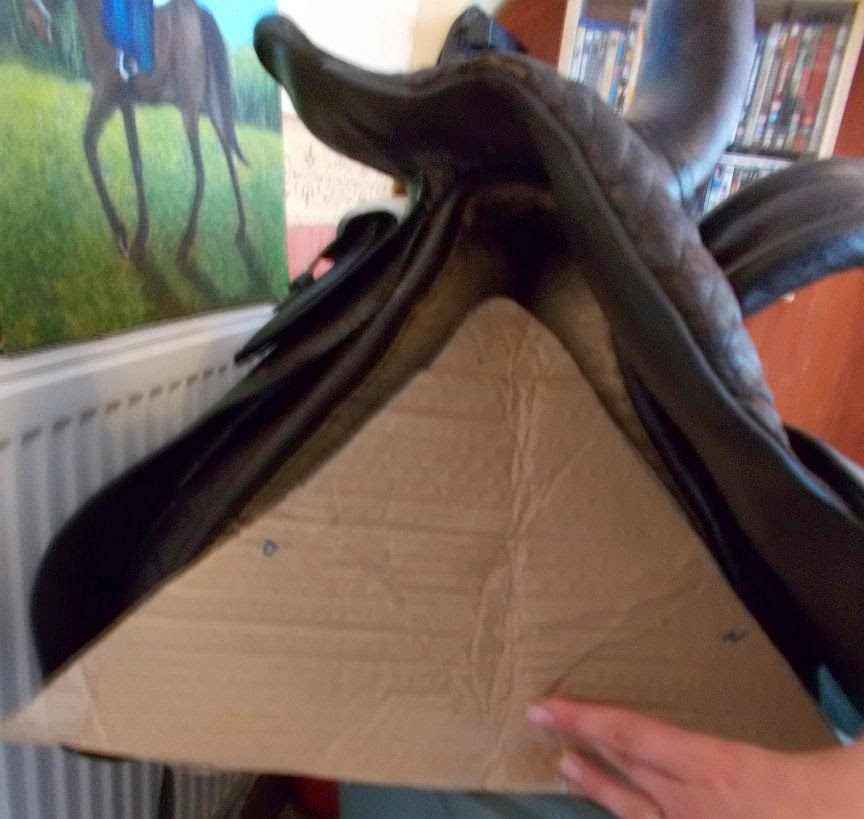 I also had some reservations of her tree condition too as when I first went to see her and test the tree, there was some creaking although, there isn't any now although I originally thought the tree was broken behind the fixed head, I think maybe now it may be the webbing? I'll take her down to the Nationals to get inspected but to be honest, Lil' Miss is going to be a display/education saddle. When they hold the Victorian days at the school where I work, I'll bring her in the for the kids to have a sit on as for most of them, it will be the closest they ever get to a horse! 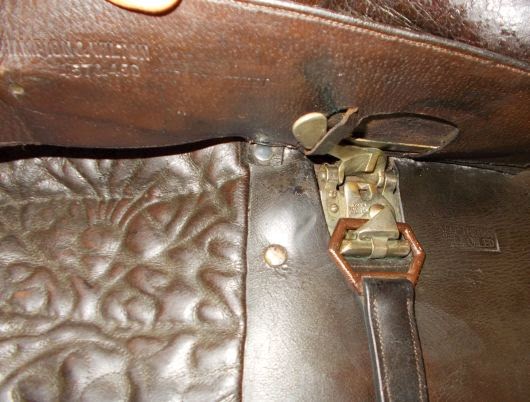 I wonder what the saddlers at Champion & Wilton thought about modernizing, what would have been considered by that date, a very old fashioned saddle? It doesn't have a hunting bar for jumping so I think it may have been updated for a child to mess about with for fun, riding on "grandma's old saddle".

There was also other remedial work done at the time too. When I first looked at this saddle, I thought the fixed head had been cut down to fit a child but after cleaning and oiling it and inspecting the head, I think the fixed head is probably the original height but was just recovered. The rest of the saddle is proportioned for a child too, it looks absolutely tiny compared to my other 1860's saddle, Long Tall Sally! The panels are in remarkably good shape so they may have been fixed up in the 1920's as well. 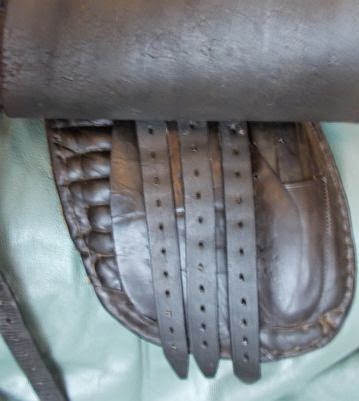 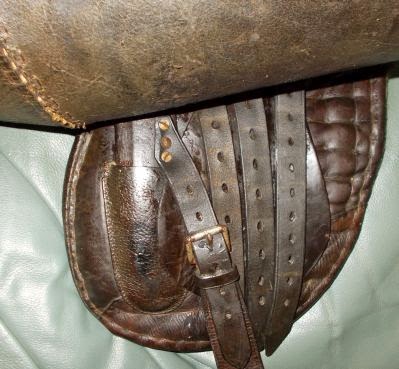 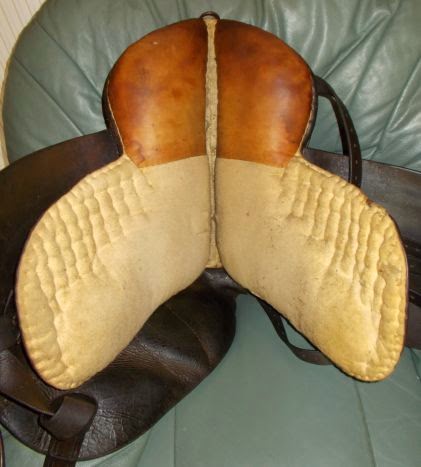 She has the old style over girth which fits over the flap and her off-side pocket is still in good supple condition. You can see how small her seat is, it measures 19" from the front of the fixed had to cantle and 13" across the seat. I "volunteered" my skinny 13 year old son to have a sit on it to see what age of child it would have fit as there is no way my bum or legs fit on it (I tried!) and it actually fit him rather nicely. He has skinny kid's legs which fit the pommels well so it looks like it would have fit a girl aged 11- 13 years old depending on height and weight riding a REALLY fine boned pony. Seats on 1860's and 1870's saddles tend to be made really wide too to accommodate the full riding skirts they used to wear, the seat on my adult sized 1860's saddle is 16" wide! 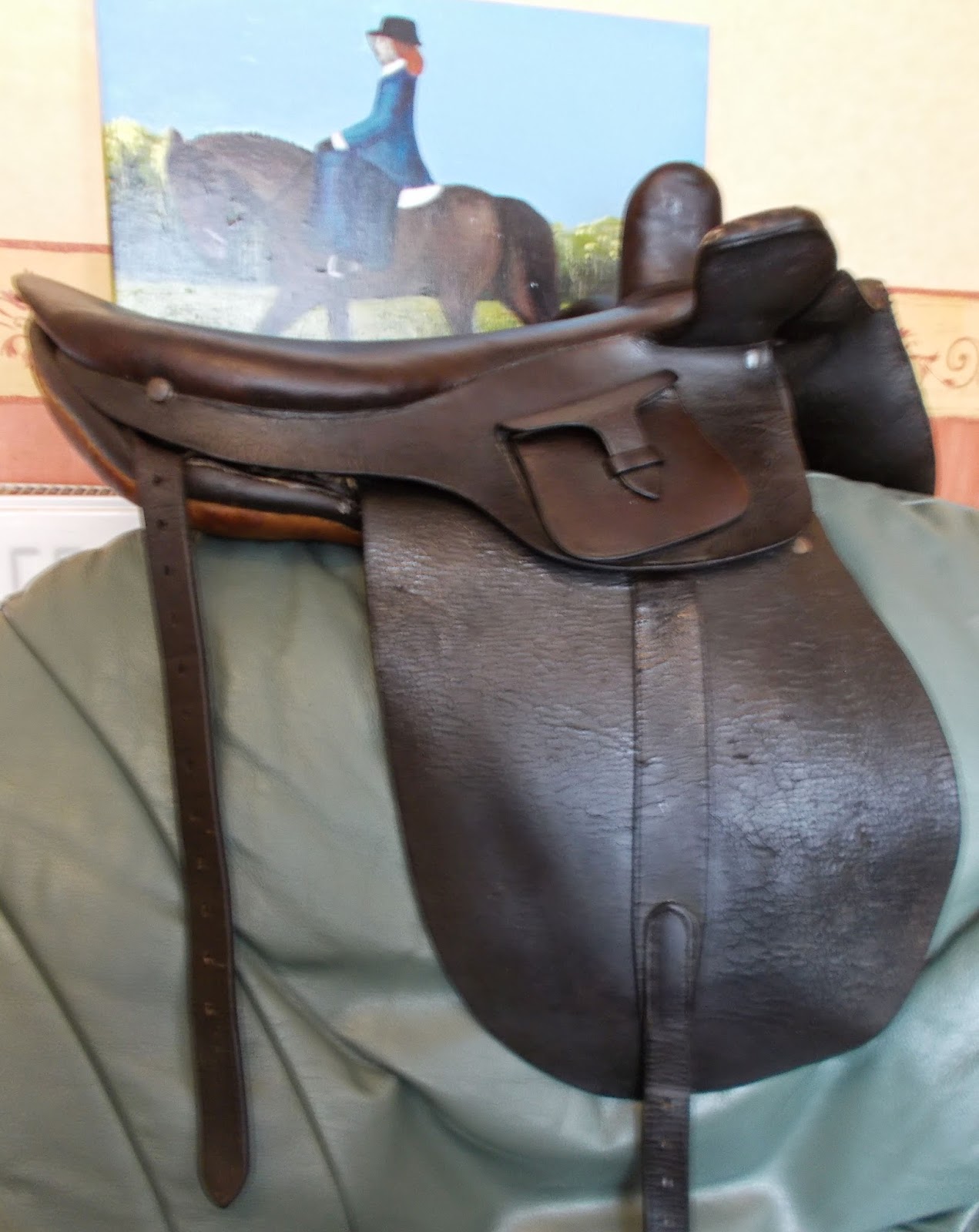 Lil' Miss all scrubbed up and conditioned with Effax! 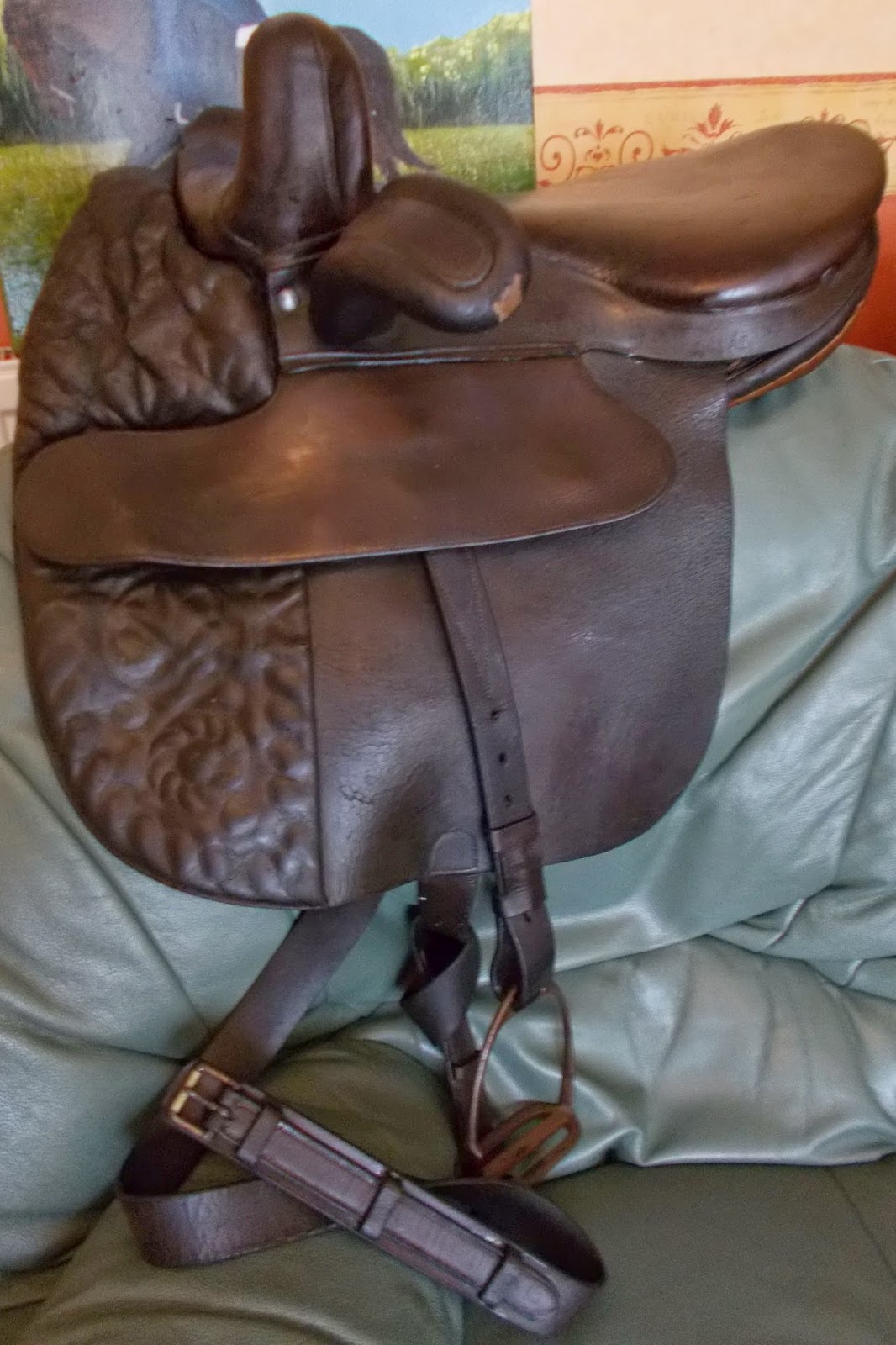