Get into The Groove

No, I'm not going all 80's nostalgic on you singing Madonna lyrics but talking about girths and girth grooves.

Most of the fit issues Hattie has had with saddles (astride and aside), has been her forward girth groove and her VERY round mare barrel. With the help of my saddler, we've managed to get around her conformation faults by adding point straps to her saddles (attached onto the very front of the tree points) and using a narrower girth that is forked at each end to allow for the "swell" of her barrel.

To be honest, I am a fan of forked girths for all horses, aside and astride but my saddler and I have worked out that narrower girths seem to work best for horses with a forward groove and a very wide barrel and wider girths for those narrower barrelled horses that also have a forward girth groove.

As an experiment, I compared Hattie and Possa who both wear my Champion & Wilton saddle. It fits both horses who have similar builds well and both horses need the point straps as both mares have forward girth grooves.

The photos of Hattie taken in the Champion & Wilton side saddle, were taken after an hour and a half long hack which consisted of trotting, cantering and galloping over ridge and furrow fields and up and down hills. Despite all this crazy action, the saddle was still sitting 2 fingers width behind her shoulder blade. 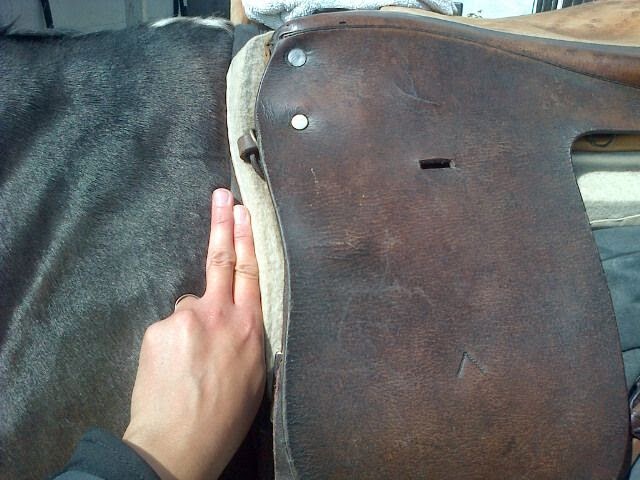 Although the saddle has stayed put, you can see that the girth has gone forward and settled into her groove. When I take up, I am always careful to pull both legs forward to get out any loose skin and to help move the girth back onto her belly but at the end of our rides, this is where it ends up. 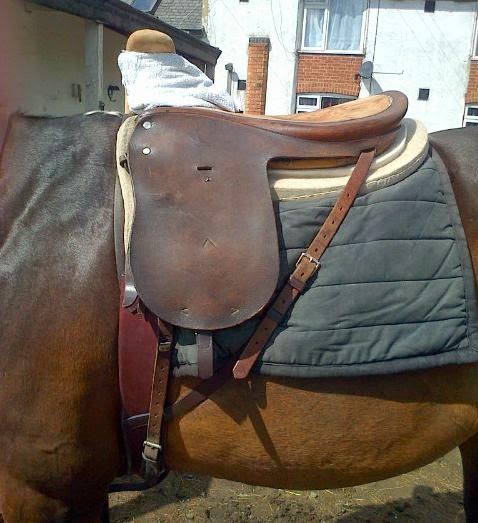 With the flap up, you can see how the girth has really arched forward to settle into Hattie's very forward girth groove. Thanks to the forked ends of the girth, the girth can arched forward to where it wants to naturally settle but not take the saddle with it. You can see how my saddle pad has ruffled back from the girth moving forward. My saddle also recommended to NOT use a separate balance girth but to use an attached one, so there is less drag on the saddle caused by her wide barrel. 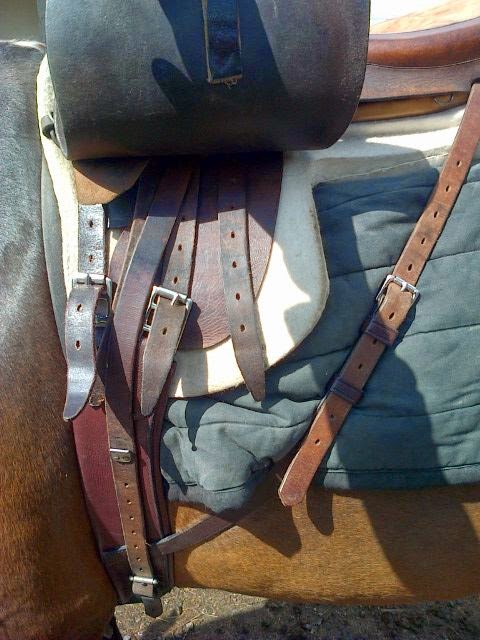 A good view of Hattie's WIDE barrel. With a narrower girth, there is less leather for her big belly to push forward and with a combi girth, the balance strap just lies quietly on top of the barrel rather than being wrapped around her mass like a separate balance girth is. 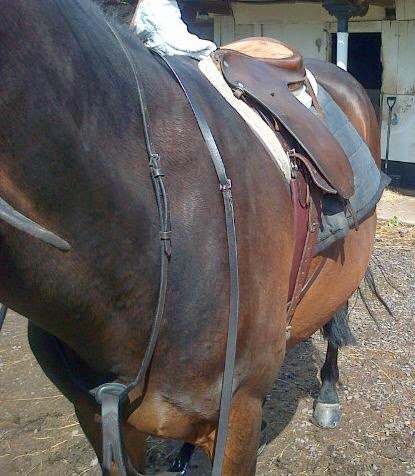 Remember how I used to post about my saddles shooting several inches onto her shoulders just after a few strides of trot? Well, look at the scurf mark that lines up with the top knuckle of my index finger, that's only about 1"- 1.5", a MAJOR improvement over our fit issues of old. 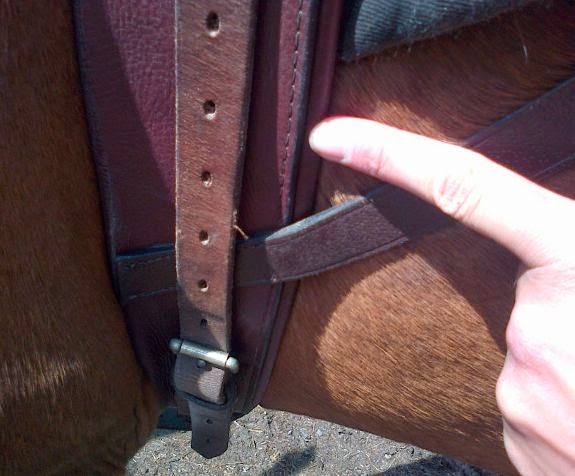 A narrower girth with two buckles (this one measures about 3" as opposed to the traditional 4" wide three buckle side saddle girths), allows the girth to curl back from Hattie's shoulders without too much bulk. Keeping Hattie's  girths soft is a must to allow them to curl back so as not to gall her. 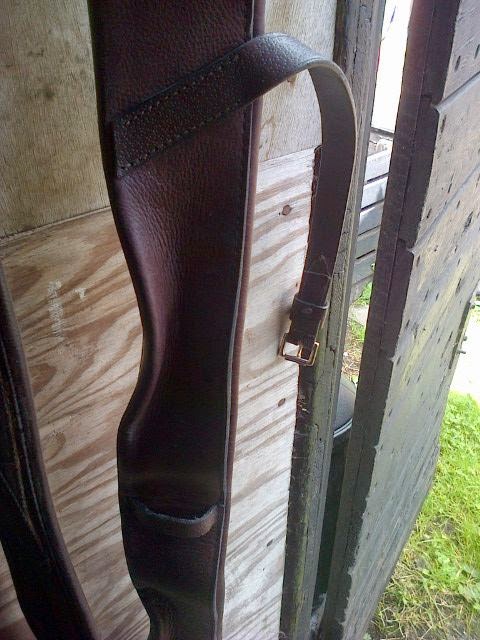 Possa on the other hand, can use a traditional 4" wide three buckle girth with the same saddle. This photo was taken after we had rode. Her barrel isn't as wide as Hattie's barrel so she is able to wear a separate balance girth but she does have a forward girth groove. She is a fit polo pony so her forward groove isn't due to being unfit or fat either. You can see that the girth has settled into her girth groove but the saddle has not moved. The first two branches of the girth's fork have kept the saddle in the correct place over her girth groove and behind the shoulder while the last branch of the fork, has kept the saddle stable over her barrel. 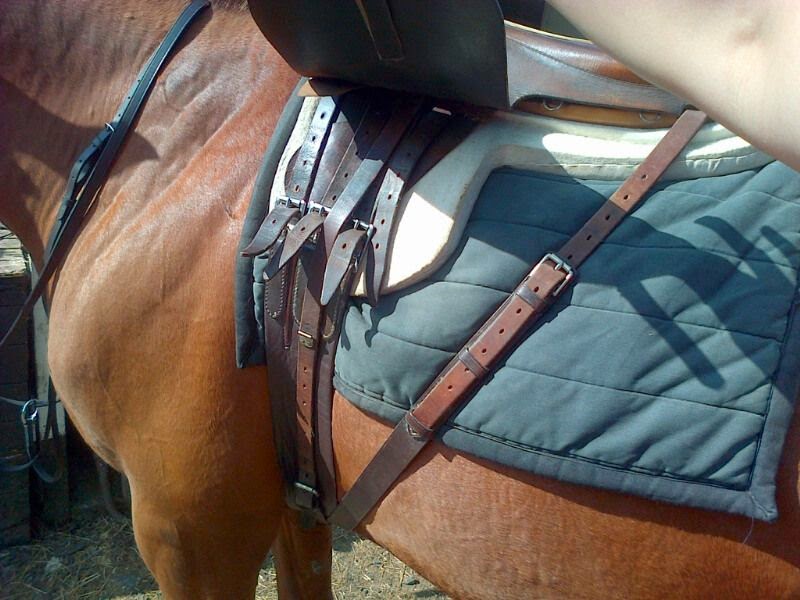 Although I have not had to deal with a saddle going backwards or that rolls, I should imagine that in those cases, the 4" wide three buckle girth, would also be useful so that the forks can be spread out over the girth straps to help keep the saddle more stable.
Posted by sidesaddlegirl at 20:21