It was supposed to be the Dianas of the Chase side saddle race today at Ingarsby here in Leicestershire but heavy snow saw the event cancelled. I was looking forward to going to see this since it's only a 23 minute drive from me but hopefully they will rerun it early next year when the snow melts. The UK isn't really equipped to handle heavy snow so best to be safe than sorry!

Luckily, we have an indoor school here at my stables so I did a bit of side saddle riding in my 1860s saddle as I currently have no other usable side saddle for Harriet (more on that in a later post). It's not the best thing to ride a big moving warmblood in and it can't take too much hammering, but it is ok for now to do a bit of walk / trot in while Harriet comes back into work and I strengthen her stifles up (Harriet has locking stifles). Did some walk/ trot / halt transitions and some should in and out but Harriet's mind was on getting into the snowy field so it was only a short schooling session today. 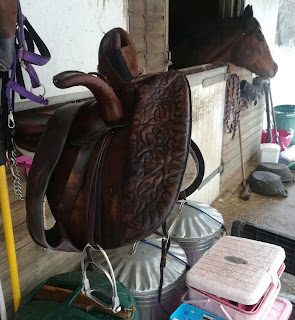 Since it is too snowy to do much riding, model horses are the next best thing! I've collected Breyer model horses since I was 12 and used to have a huge collection which I later sold when I moved to England in 2000. Thankfully, Breyers are becoming easier to find in the UK so the collecting bug for them has been rekindled. I couldn't believe it when I heard that Breyer was bringing out a Side Saddle Horse and Rider set in 2006 but never thought I would be able to find one in the UK. Then one day when my fiance (now husband!) and I were looking for a venue for our wedding reception in January 2007, we passed by the toy shop in town and there was one in the window with a £49.99 price tag. Forget the wedding, that Breyer set was mine so marched in there and bought it. I had kept it in it's box ever since, until yesterday, when I decided to finally open it. After ten years of being stored in my closet, the box was getting battered and thought to myself that it was time to enjoy my Breyer. 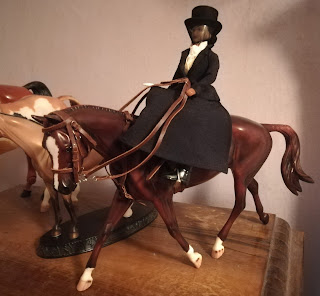 I'm so pleased that I did open it as the set has real leather tack and a Champion and Wilton style side saddle complete with white "string" gloves and a sandwich case. 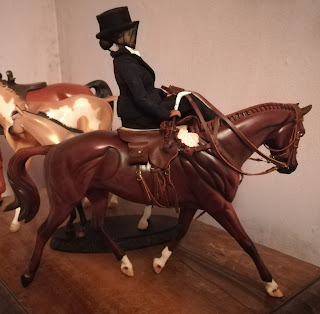 Although not a "side saddle set", I did come across an offside western Steele side saddle on Ebay which was custom made by a Breyer tack maker. There are not many offside side saddle around let alone Breyer ones, so this one was added to my collection to go on Halla (who looks sort of like Hattie did). 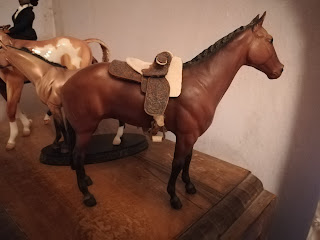 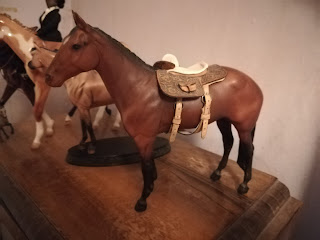 Not Breyer but Barbie time, is her horse called Dancer. Dancer is from the late 60s- early 1970s and probably was the best and most realistic of every Barbie horse ever made. She had articulated joints and as a kid, my Dancer was everything from a Tennessee Walking Horse to a top level show jumper. I believe there were a few Dancer horse sets in the 70s, an english one, a western one, a side saddle set and a set that had a stand to allow Dancer to "jump" or gallop. 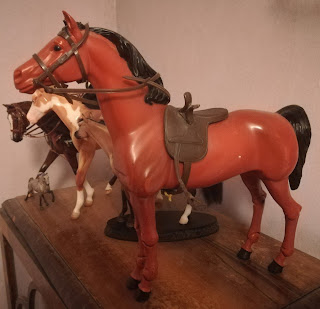 What is neat about the Barbie side saddle, is that it was moulded after a Champion and Wilton  saddle with realistic narrow pommels. Modern Barbie side saddles have kept the same body of the saddle with the Champion & Wilton styling but the pommels have changes so that Barbie literally sits sideways with her legs hooked through the horns. 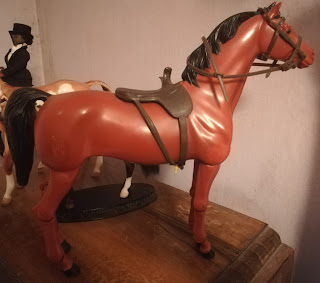 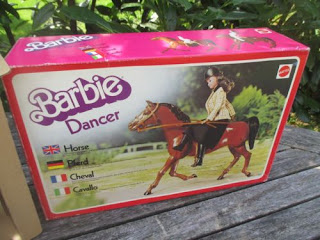 Last but not least, is is the pink Barbie side saddle from the 1983 Prancer set. They used the same Champion & Wilton saddle mould for the Prancer side saddle but made in pink rubber instead of brown. As a child, this always annoyed me as I wanted my tack to look realistic and Barbie was a top equestrian so couldn't have a pink side saddle so I got out my black marker and coloured it all in black. That "black" side saddle got lost when I moved here but I found this pink one on Ebay and it now lives on my mini rocking horse beside my computer. 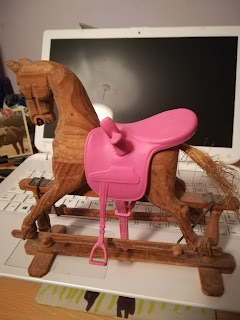